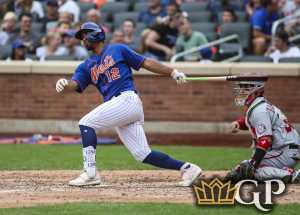 Last weekend the great run ended as we ended up going 2-8 but alleviated most of the losses by cashing in on the Rockies +477 to win the series against the Dodgers; best bets now 86-49 for the season. Here’s to bouncing back with this weekend's Best Bets!

Last weekend’s baseball sucked. In turn, my Weekend MLB Best Bets sucked as well. Starting pitching matchups changed. I said what still stood and what was cancelled on Twitter @MikeRose77. Hope you’re following. Regardless, we ended up going 2-8 but alleviated most of the losses by cashing in on the Rockies +477 to win the series against the Dodgers; best bets now 86-49 for the season. Of course the one game they lost was the one recommended to bet! And that loss Saturday night with Means and the O’s hurt badly after getting out to a 3-0 lead and losing 4-3. Here’s to bouncing back with this week’s installment of Weekend MLB Best Bets!

We’ll kick Saturday off by going right back to the well with the Mets up against the Nats’ Eric Fedde. The move played off last Sunday when I backed the Metropolitans with Tylor Megill on the bump. New York proceeded to tag Fedde for eight hits and 5 ER through his 5.1 innings to cruise to the 9-4 triumph and earn Megill his first win in over a month. Marcus Stroman gets the starting nod this time around. He’s allowed two or less ER in five of his last six trips to the bump. More importantly, he’s the owner of a legit 2.85 ERA that’s backed by a 3.40 FIP. He being hit around by the Nats this season should bring out his “A” quality stuff for start No. 29. While Fedde’s been decent vs. the Mets through four starts pitching to a 4.22 ERA and .250 BAA, he’s still the owner of a 5.08 ERA and has only logged quality starts in 27 percent of 22 overall starts. Washington has lost all four of his made starts against the Mets, and today will be no different.

I’m still pissed about the BoSox pissing away last Sunday’s game to the Tribe. Houck went 5.1 innings and allowed 3 ER. His control proved to be an issue as he walked four and only registered 3 K. Then Boston’s bullpen allowed Cleveland to pull out the 7-5 comeback win. He’ll oppose Eli Morgan in this one as well who only allowed two hits in his abbreviated start (3 IP), but both left the yard. Knowing full well it didn’t get out to a big enough lead the first time around, I don’t foresee the Red Sox letting off the gas in the rematch. I also fully expect Houck to be much sharper. Hit Boston on the moneyline or on the -1 run-line and also hit their team total over.

After having the brooms busted out on them in Tinseltown and scoring a grand total of eight runs throughout the series, I fully expect the Atlanta Braves to bust out the boom sticks in Colorado through Sunday. Though the opponent is German Marquez, the Rox right-hander hasn’t been on top of his game over his last four starts in allowing 26 hits (7 HR) and 19 ER. On the flipside, Ian Anderson will be making his second start since coming off the IL and looked great coming off it in shutting the Giants out through 5.2 innings. Though he failed to register a single strikeout, it was good to see him back on the bump after a 1.5 month lay-off. It’s Braves or nothing for me in this one, and I expect some runs to hit the board as well so slam the F5/FG over as well.

We’re heading right back to Nationals Park to kick Sunday off in the finale between the division rivals. If you’ve been reading this piece over the last six weeks, you know I got a little man crush on Josiah Gray. I was backing him in some way, shape or form with the Dodgers and in numerous other spots since being shipped out to D.C. The Mets are yet to see his stuff which means he could tally a hefty amount of strikeouts in this his ninth start of the season. With that, target his K prop and fire on it so long as it’s six or less come game day.

It’s tough laying any kind of number with the White Sox right now with some integral pieces out of the lineup, but I simply have no choice to do so in this spot with Dylan Cease owning the Royals this season. He’s made four overall starts and stands 1-0 with a 1.21 ERA, 1.03 WHIP and .182 batting average against through 22.1 total innings. He allowed only 14 hits and tallied 26 K in those outings. Daniel Lynch has been great since getting recalled at the end of July, but I foresee a reckoning of sorts in this his third start against Chicago. He avenged the 8 ER bludgeoning suffered in his second career start by tossing five innings of 1 ER ball at the Pale Hose back on August 5; a game KC won 3-2. I don’t foresee it being as memorable this time around. Look for Jose Abreu and the gang to do some damage, and for Cease to go over his K prop versus the Royals once again.

The fall from grace for the Padres has been quite the sight to see. Now a half-game out of the Wild Card race and sitting 14 games out in the NL West, my ticket on them to miss the playoffs is looking better and better with every passing day. It seriously wouldn’t come as a shock to see them get swept in this series when taking a gander at the scheduled pitching matchups. Chris Paddack gets the start in the finale. His 7-6 record and 4.98 ERA comes off as quite the disappointment. On the flipside, Luis Garcia remains in the mix for the NL Rookie of the Year Award. He’s conceded three or less ER in each of his last five starts, and led the Astros to wins in each of his last three road outings. SD has just one series win dating back to August 12, and it was just registered against the woeful Arizona Diamondbacks. Fade this team today and moving forward – Slam Your Man!