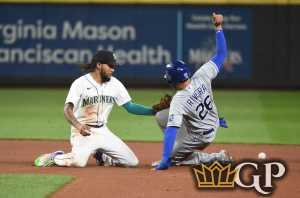 I am coming off a super 9-1 weekend, just missing perfection. The 9-1 showing moves the best bets to 84-41 for the season; not a misprint! Here’s to another installment of Weekend MLB Best Bets keeping us in the win column!

The Weekend MLB Best Bets raged last week compiling a 9-1 overall mark that came a late game collapse from the Houston Astros away from cashing all 10 recommended positions. The White Sox and Rays combined for easy F5/FG overs to kick Saturday off followed by a pair of ticket cashes with the Reds over the Marlins and Cincy surpassing its team total. The night closed out with another win to make it a perfect 5-0 day after the Padres outlasted the Phillies in extra innings. Though Framber Valdez ultimately went over his K prop, the Astros failed to hold onto a late 2-0 lead and allowed the M’s to best them in extras getting Sunday off to a 1-1 start. The Giants got us back in the win column by snaring the 2-1 win over the A’s to take the Bay Bridge Series; then Marcus Stroman and the Mets finally snapped their losing streak to the Dodgers and cashed the alternate run-line as well. The 9-1 showing moves the best bets to 84-41 for the season; not a misprint! Here’s to another installment of Weekend MLB Best Bets getting us back into the win column!

The Royals have been feisty of late having won seven of 10 and taking a lead in the series opener with the M’s on a Salvador Perez grand slam. I’m not feeling it in this spot however. Carlos Hernandez has been fantastic over his last five starts pitching to a 2.05 ERA and 0.98 WHIP, but his 3.65 FIP forecasts a bit of regression coming his way. Seattle is just the team to get the job done with it up nearly 16 units against RHP and sitting 12 games over the breakeven point as hosts. Though KC has raked LHP over the last week, it’s more an anomaly with it ranked No. 26 against south paws for the year. Tyler Anderson threw at the Royals back in late April while with Pittsburgh and held them to just three hits and 1 ER while logging 5 K through 6 IP. He’s gone at least five innings in each of his five made starts for the Mariners and conceded three or less ER each time. He’ll be in line for another quality start and win once this one wraps.

The Rays have made minced meat of the Orioles taking all but one of the 16 played meetings to date. The smallest margin of victory over the last seven has been three runs. Baltimore has basically been an auto fade whenever matched up against Tampa Bay. It’s been as easy as set it and forget it. Not tonight! My boy Johnny Means is going to tame the beast regardless of getting blown up for 29 hits (6 HR) and 14 ER in his four 2021 starts against them. The O’s 18-game losing streak is now a thing of the past. They just took two of three from the Halos and combined to score 31 runs in the process. Luis Patino’s got some electric stuff, but he’s wild (3.7 BB/9) and is very hittable (45/51.2 IP). Look for Cedric Mullins and company to get theirs and for Means to put forth one of his more dominant starts since returning from the IL. Bet the O’s and over their team total. Throw some beer money on the alternate run-line as well should Means actually catch a number from linemakers.

Here I go picking on David Price again. I truly believe him to be cannon fodder and the Rockies have been swinging some unforgiving sticks recently. So much so that they’ve won six of their last nine games heading into Friday night’s series opener. Jon Gray’s regressed of late, but he’s only allowed 19 hits (4 HR) and 8 ER with a K/BB ratio of 21:8 in four starts and 21 innings thrown at the Dodgers this season. The Rockies have rocked LHP all season (.781 OPS) while averaging 5.0 runs per game and going 24-18. Price is done. He’s only a thing in LA right now due to his contract and the fact that Dave Roberts needs arms. After coming off intense series against the Mets and Padres and the Braves on deck, I foresee the defending champs taking this series off. The roster isn’t 100 percent and Roberts knows it. Hit the Rox to take Game 2 and take a flier on their odds to win the series once they hit the board Friday.

I’m a sucker for this Houck kid! While he’s been hit around quite a bit lately and seen his ERA swell because of it, he’s still the owner of a rock solid 1.95 FIP overall. On top of that, he’s averaged nearly 12 strikeouts per nine innings and backed that up with a total of eight free passes through just south of 40 total IP. As big a series this is for the Tribe who trail Boston by 8.0 games for the second wild card slot in the AL, Cleveland simply just doesn’t have it. The offense’s best trait is the ability to hit the long ball (No. 10). Houck’s only given up two home runs which equates to half a HR per nine innings. Eli Morgan’s been tough to gauge recently. He’s either been lights out or been lit up. I’m betting on the latter and fully expect Devers and company to serve him his brunch!

I’m not jumping off the Jesus Luzardo fade train just yet. This kid was expected to be a prized possession of the Oakland A’s starting rotation for the next decade, but it hasn’t turned out that way. Far from it actually! He was shipped off to Miami in the Starling Marte deadline deal after missing a bulk of the season due to breaking his hand playing video games. Since then, Mattingly has gotten five starts from the lefty in which he proceeded to get shelled for 31 hits (5 HR) and 24 ER while failing to pitch through the sixth inning even once. You know whose been peppering LHP over the L/30 days? That’s right, Joey Votto and the Cincinnati Reds who clock in No. 1 during that stretch. Don’t overthink it, fade Luzardo! Hit the Cincy moneyline as well as the over of their team total.

Now eight games out in the NL Wild Card race, the season is slowly but surely getting away from the New York Mets. But there’s still hope! The next two weeks will be the defining stretch of the season with Pete Alonso and company set to square off against the division rival Nationals and Marlins 14 times. Seriously, what were the schedule makers smoking?! Anythehoo, Tylor Megill got skunked by the San Francisco Giants for 11 hits (4 HR) and 7 ER earlier in the week. I know he’s been pretty terrible since lighting MLB on fire in June and July, but he’s going to get run support in this one with NY set to square off against the hittable Erick Fedde. Washington is yet to see Megill’s stuff, while this will be the fourth time NY will have run up against Fedde this year. That’s enough to have me backing NY both on the F5/FG moneylines, and I’ll also be targeting the over of Megill’s K prop if it comes out in the 4.5 to 5.5 range – Slam Your Man!