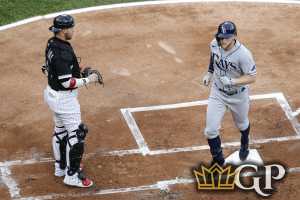 As hot my Weekend MLB Best Bets have been over the last six weeks, regression was bound to hit at some point. It did last weekend, but the overall damage wasn’t as bad as I ultimately expected. In all, my selections went 3-4 To move us to 75-40 overall and came oh so close towards still producing a plus-money return. Josiah Gray’s outing against Atlanta was moved to Friday, so it’s not included in this recap. Saturday was tough to stomach. The Mets had numerous opportunities to cash in as nice sized home dogs against the Dodgers, yet still managed to lose in extras. Hat tip to Taijuan Walker for not backing down to NL Cy Young Award leader Walker Buehler. The nightcap sucked with the F5/FG Under in Seattle immediately getting blown up due to the long ball. Sunday was a different story however save for the White Sox never truly competing with the Yankees. Triston McKenzie raced past his laughable 4.5 K prop – something I pointed out on Twitter – by going off for a whopping 11 K and taking a perfect game into the ninth. The Angels also cashed in as big home dogs to the Astros, and Reid Detmers put the cherry on top by also surpassing his K prop. Let’s get back in the win column with another installment of Weekend MLB Best Bets!

The second game of the three-game set between these division leaders pits left-hander Dallas Keuchel up against right-hander Luis Patino. Both offenses rank out amongst the best in the league at taking walks. Chicago clocks in at No. 5 and Tampa Bay No. 4. Over the last 15 days, each has seen it fall down the rankings. I expect both squads to improve the output today with Keuchel walking upwards of 3.5 batters per nine innings over the last 30 days and Patino the owner of a pitiful 5.3 BB/9 average during that same stretch. Though Chicago sits only two games over .500 to the over versus RHP and TBY two games under .500 against lefties overall, I’m expecting both offenses to take advantage of the charitable contributions both SPs offer up in this early tilt. Hit the F5/FG overs even harder should an ump with a tight K zone and affinity towards calling high scorers settle in behind the dish.

The Redlegs just dropped an unforgiveable series to a Chicago Cubs team that entered it losers of 11 straight games. That’s not something a team battling for its playoff lives needed at this point in time. Now 9.5 games out in the NL Central and only 1.5-games out in the Wild Card race, it’s high time the ‘Natti put its big boy pants on and started playing the type of ball worthy of punching a ticket to the postseason. Wade Miley hasn’t taken a loss since May 19! He’s thrown shutout ball through seven innings in two of his last three starts. Miami’s 13-24 versus LHP to date and Braxton Garrett’s had issues with walks and serving up the long ball since getting called up. Though the absence of Jesse Winker sucks, I still expect Cincinnati to hang a crooked number. Bet Cincy on the -1 run-line if available or split the bet up between the moneyline and -1.5 run-line to turn it into a -1 wager. Also hit the over on the Reds team total.

This is a huge series for both the Phillies and Padres who currently find themselves fighting with the Reds, Cardinals and Mets for the second NL Wild Card berth. The Dodgers have the first all but locked up sitting 9.5-games ahead of the pack. Being completely transparent, I hit San Diego not to make the playoffs at the tail end of last week at +185. It’s now down to +105. That’s how bad Jayce Tingler’s squad has been since the ASB. That said, I have no confidence in Aaron Nola whatsoever. He’s supposed to be the staff ace of the rotation but enters start No. 26 just 7-7 with a bloated 4.48 ERA and hasn’t logged a win since early July. Making matters all the more worse is his ineffectiveness when pitching away from CBP (3-4/5.56 ERA). Joe Musgrove just got rocked for 10 hits (1 HR) and 6 ER in the desert. He earned a win in three of his four prior starts and has excelled at Petco where he’s the owner of a 2.43 ERA and .200 BAA. With Fernando back in the lineup and the Friars coming off an embarrassing sweep in Coors, look for San Diego to hold serve; at least on this night.

A battle of south paws is locked in for the finale of these division rivals with Tyler Anderson matched up against Framber Valdez. I still can’t believe the M’s are entrenched in both the Wild Card and AL West pennant races right now, but it is what it is. That being said, I’ll be fading the Mariners in this spot. While Seattle has held its own against left-handers in going 25-22 to date, it doesn’t hit them nearly as hard as the Astros who rank out as the leagues fourth best hitting team against the handedness. On top of that, Houston has compiled a 26-21 record against lefties and averages better than a run more per game against them than the Mariners. Though Valdez has taken losses in two of his last three starts, Seattle is yet to see his stuff this season. He should be in line for a quality start and have a high percentage shot of surpassing his K prop with the M’s K’ing against lefties at a 28.8 percent rate. Hit the ‘Stros -1 and over Framber’s K prop!

Sorry, but I’m just not buying into the A’s being one of the best the AL has to offer. Their hitting is way to schizophrenic for my tastes and their starting pitching – regardless of being ranked first in the quality start department – is starting to fall upon hard times; especially with Chris Bassitt hitting the IL due to a fractured cheek bone. Frankie Montas has undoubtedly been serviceable this season in pitching to a 4.04 ERA, but he’s just 9-9 through 24 total starts and been worse at home (4.40 ERA) than on the road (3.64 ERA). Logan Webb has conceded two or less ER in all eight of his starts since returning from the IL. He’s tallied 25 K to just 4 BB allowed in his last three starts and amassed 19.1 total innings. Each of his last five starts have been of quality. Pair that with a Giants team that ranks out as the best bet in all of baseball, and I’ll be riding them in Sunday’s finale of the Bay Bridge Series.

The Mets finally just snapped an absurd five-game losing streak after saving face by avoiding having the brooms busted out on them by the Giants on Thursday. The Dodgers did just go into Citi Field last week and sweep New York, but the first two wins came by 6-5 and 2-1 final scores in extra innings. The Mets have what it takes to compete with the reigning World Series champs; all it needs is for the offense to finally come up with some timely hits – something it failed to do over the course of last week’s series. Marcus Stroman is a gamer and will be way up for this start against David Price whom I have pegged as the weak link of the Dodgers rotation. After squaring off against Buehler and Scherzer the previous two games, Pete Alonso and company will be licking their chops to get a piece of him. LA will be favored to win regardless, so hit New York as dogs but also hit them on the alternate run-line at -1 or -1.5 to sweeten up the pot – Slam Your Man!