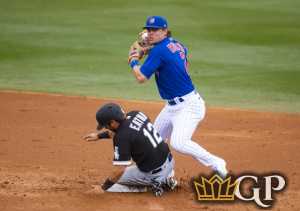 Mother Nature was at it again this past weekend pushing pitching matchups back, but it still didn’t stop my Weekend MLB Best Bets hot streak that saw tickets get cashed at a 4-2 overall clip. The 4-2 showing moves my best bets to 65-35 for the season.

Mother Nature was at it again this past weekend pushing pitching matchups back to screw everything up. It still didn’t stop my Weekend MLB Best Bets hot streak that saw tickets get cashed at a 4-2 overall clip. The only defeats occurred in the matchup between the Rockies and Padres with German Marquez squaring off against Yu Darvish. The F5 under got smoked in the fifth, and of course, the full game under went by the wayside in the bottom of the ninth; with two outs no less! Other than that, we cashed in with the Orioles and Twins as underdogs on Saturday, and followed it up with wins on the A’s and Rays in the Sunday nighter. My touted position on Robbie Ray going under his K prop was wiped out due to his start being pushed back to Monday. The 4-2 showing moves my best bets to 65-35 for the season. Here’s to getting back in the green this weekend!

The White Sox will undoubtedly be popular choices of the betting public to come out on top of this matchup with AL Cy Young Award contender Carlos Rodon set to square off against the struggling Adbert Alzolay. Makes sense considering Chicago has only come out on top in one of the youngster’s last nine trips to the bump. However, the righty has been a completely different pitcher in day games than he has at night. First pitch is at 2:20 ET! The home run ball has been an issue with Alzolay evidenced by his 2.1 HR/9. However, he’s only conceded four of 23 in day games. I’m gonna go against the grain here and suggest betting the White Sox team total under and the over of Alzolay’s K prop which should be reduced since he’s only tallied four each in his last two starts. Look for a bounceback outing from Alzolay and for the game to be low scoring and competitive.

The Reds just might be onto something with this Vladimir Gutierrez cat! If he’s not getting rocked, the right-hander has been dominant evidenced by five of his last seven starts being of quality. I’ll never run to the betting window to back him against upper echelon offenses, but the skeleton crew the Pittsburgh Pirates trots onto the field doesn’t instill much fear. On top of that, Mitch Keller and his 7.05 ERA and 11.0 hits per nine innings allowed should offer up some batting practice for a Reds lineup that’s averaged 5.9 runs per game since getting shutout by the Mets back on July 21. Hit the Reds on the -1 run-line or bet the moneyline and -1.5 run-line to make it a -1 wager. Cincy wins this one going away!

I had Washington pegged as a team that could make a run at the All-Star break. So much so that I placed a couple units on them qualifying for the playoffs at 10-1. Unfortunately, I can likely rip that ticket up now that upper management blew the team up and it’s still 7.5-games back in the NL East. That said, I absolutely love one of the trade pieces that came over from LA in exchange for Mad Max and Trea Turner. Josiah Gray is going to be a stud in the near future. He’s already opened my eyes with a blazing fastball and curve that drops off the table. He didn’t truly impress in his debut, but I have a feeling that he excels in start No. 2 against a Braves team that’s struck out the third most times in the majors against righties. Hit the over on the youngster’s K prop and enjoy the show!

Jorge Lopez has come from out of nowhere and dazzled in spots this season. That occurred last time out in New York where he sliced and diced the Yankees en route to tossing six innings of 1 ER ball while registering 4 K. Somehow, he managed to get away with issuing five walks. I don’t expect lightning to strike twice; not against the Rays! Tampa Bay was embarrassed earlier this week at home by the Seattle Mariners. I expect them to go all out to win this series. Even with Michael Wacha on the bump, I’m riding TBY to victory!

The finale of this three-game set between division leaders should be a good one. While Johnny Cueto has excelled more so in his home ball park (3.09 ERA) as opposed to the road (4.91 ERA), I’m still going to take a flier on the Giants at a near even money price. I never have and never will want anything to do with Brett Anderson. While the lefty is in the midst of a fine season, he’s always ripe to go down early due to injury and has only amassed three starts of quality through 16 tries. With Josh Hader out of the mix due to COVID and San Fran being forced to deal with Woodruff and Burnes in the first two games of the series, I fully expect their bats to be out to eat in the finale.

Since getting blown up for 5 ER against the Reds and Red Sox in back-to-back starts, Kris Bubic has provided the Royals with four straight quality starts. He allowed a grand total of 16 hits and 7 ER through his 24 combined innings of work while racking up a 20:9 K/BB ratio. Busch Stadium is a fantastic pitcher’s park, and while the Cardinals have been better against south paws than righties, I still think his good fortune continues in this getaway spot. Jon Lester got ripped for nine hits (2 HR) and 6 ER in his Redbirds debut. The veteran should however bounce back in this spot with no other team in the majors worse at hitting lefties than the Royals. So long as an under ump situates himself behind the dish, I’ll ride the under for the F5 and FG – Slam Your Man!