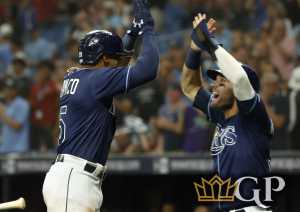 One strikeout! One measly freaking strikeout cost us yet another winning card on my most recent installment of Weekend MLB Best Bets. The 4-4 showing moves my best bets to 61-33 for the season. Here’s to getting back in the green this weekend!

One strikeout! One measly freaking strikeout cost us yet another winning card on my most recent installment of Weekend MLB Best Bets. Yu Darvish and Lance Lynn each came half a K short of going over their respective K props. And then there was the late-game meltdown by the Red Sox against the Yankees on Saturday; gross! Regression was bound to hit as we had been tearing it up for the last three weeks. Thankfully, there were some wins in the mix as well with the Phillies, Rockies/Dodgers Under + over Gonsolin’s K prop as well as a nice underdog ticket cash on the White Sox against the Brewers on Sunday Night Baseball. If following along, be sure to follow me on Twitter (@MikeRose77) for any additions/cancellations of plays due to weather, COVID and whatever else changes up the pitching matchups. The 4-4 showing moves my best bets to 61-33 for the season. Here’s to getting back in the green this weekend!

It’s flat-out bonkers to believe, but the Tigers are now only six-games under .500 after outslugging the Twins 17-14 earlier in the week. No team has been playing better ball than A.J. Hinch’s crew. As bad John Means has looked through his first two starts since returning from the IL, it wouldn’t shock me in the least if Detroit ends up being favored by linemakers to win this game. Actually, I’m hoping that turns out to be the case so I can fade Matt Manning big time! He’s not good. Means is leaps and bounds better and this could be the spot the switch is flipped. Should Baltimore hit the board dogged, you best get that bet in pronto; sharp bettors won’t allow an error like that to last very long!

We backed Woodford in Cincinnati last Saturday and came out a loser. His stuff paled in comparison to what he threw against the Cubs in his debut as a starter the outing prior. His fastball is in the low 90s and his secondary stuff isn’t special. Though Minnesota continues to be one of the biggest money burners in the league, I like them at an underdog price in this spot with Bailey Ober on the bump. The right-hander has been rounding into form of late. Though he might only give us six innings at best, I think it will be enough with the cushion Josh Donaldson and company should give us.

Darvish let me down in a big way last Sunday when he failed to surpass his 6.5 K prop regardless of notching three strikeouts in the first two innings. I won’t be going back to that well in this spot with the Blue Jays only striking out fewer times than the Rockies against right-handed pitchers over the last 30 days. Instead, I’ll look to the total instead with the Padres staff ace set to go up against Colorado’s No. 1 in the form of German Marquez who just saw his 6-game under streak get halted last time out. Provided an under ump nestles in behind home plate, I’ll be hammering the under for the F5/FG in this fantastic pitching matchup.

If not for Robbie Ray, the Blue Jays overall pitching stats would be a whole heck of a lot worse than they currently are. The left-hander has simply been sensational as he’s morphed into a completely different pitcher due to Pete Walker being the “Pitcher Whisperer.” That being said, this assignment against a confident Royals offense is going to be a challenge. KC just went up against Lucas Giolito and Dylan Cease and only combined to strikeout 13 times. Overall, KC has been the third toughest offense for opposing pitchers to log strikeouts against. Versus south paws, they’ve been the fourth toughest team to fan. With Ray going for at least 8 K in each of his last three starts, look for linemakers to hang an inflated number. Once they do, we’ll take advantage by slamming the under!

This is a gut feel more than anything else. There’s simply no way Shohei Ohtani continues to run this good. He’s due for a clunker on the mound, and the A’s are just the team to do it as they continue duking it out with a multitude of teams for one of the two AL Wild Card slots. While he’s limited Oakland to just six hits and 3 ER through 12 innings over two starts this season, he did get tagged for the loss in one of them. James Kaprielian just shut the Halos out through six innings back on July 20, and had allowed 3 or less ER in eight straight starts before getting his bell rung by the Padres last time out. Look for him to excel once again and for Matt Olsen and company to do just enough with the lumber to squeeze a win out in the finale.

For the second straight week, we’re investing on a side in the Sunday nighter. Last week we faded Brandon Woodruff and the Brewers by backing the White Sox. This time around, we’re going to hitch our wagon to Rays' young phenom Shane McClanahan and look for the left-hander to lead Tampa Bay to a crucial win over their rivals. While he’s been a five-inning pitcher at best, his stuff can’t be denied – it’s nasty! Nick Pivetta has done nothing to instill confidence of late. He’s allowed four or more ER in four of his last five starts. Though he’s dominated the Rays offense this season, I can’t help but think Nelson Cruz and the offense find a way to hang a crooked number on him this time around as cold he’s currently running – Slam Your Man!