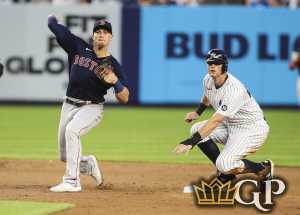 My Weekend MLB Best Bets couldn’t have performed any better with all four suggested investments cashing in for those that followed. Let’s keep the good times rolling and the bankroll growing with another installment of best bets for the weekend!

My Weekend MLB Best Bets couldn’t have performed any better with all four suggested investments cashing in for those that followed. The Brewers got the job done for us with Woodruff on the bump to open Saturday’s action, and was closed out with a dominant effort from Lucas Giolito to lead the White Sox to the 10-1 laugher over the Astros. Zack Wheeler opened Sunday up with another ticket cash on his K prop. Hopefully you got in on that one early! Those that didn’t had to settle for a push. While it wasn’t easy and we had to deal with weather delays and a blown save, the Nats found a way to come out on top of Sunday’s finale with the Padres. The 4-0 showing pushed my best bets to 57-29 for the season. Let’s keep the good times rolling and the bankroll growing with another installment of best bets for the weekend!

For all intents and purposes, this series could decide whether the Yankees are buyers or sellers come the trade deadline. Somehow, New York took two of three from the BoSox last weekend to at least remain within an arm’s reach of their hated rivals in the AL East standings. I fully expect Boston to come out determined to put an end to these shenanigans. New York just doesn’t have it this year due to injuries and COVID. Nathan Eovaldi has dominated the Yanks in throwing 18.2 innings of 3 ER ball at them while racking up a 20:1 K/BB ratio. Taillon’s been better of late, but I’m selling him in this spot. Hit Boston on the -1 run-line and look for it to land a punishing blow to New York’s future prospects.

Here I go picking on Luis Castillo in the GAB for the second time in as many weeks. The Reds have been ravaged by the injury bug recently which has seen them plummet down the NL Central standings. Now 6.5-games in back of the Brewers and without Nick Castellanos – the heart and soul of the offense – for a few more weeks, I’m fading them in this one against the Redbirds who will be looking to leapfrog them in the standings throughout this weekend set. I liked what I saw from Jake Woodford against the Cubs earlier this week enough to confidently back him and the Cards as road dogs.

If ever Tony Gonsolin was going to go deep in a game and log a quality start, this is it! The Rockies have been horrendous away from Coors all season long in acquiring just nine wins through 43 tries for a -$2102 return on investment. So long as Mookie Betts is back atop the batting order and LA’s long arms are available just in case, I’ll confidently lay the home chalk and hit the run-line as well to turn it into a -1 wager.

Touki Toussaint was a revelation in his first start in the Bigs in over a year earlier this week after shockingly holding Fernando Tatis Jr. and company to just three hits and 1 ER through 6.2 innings of work. Because of it, he’s now one of the hotter commodities in fantasy baseball circles. I’m not buying it! Not now, and especially not in CBP against a Phillies outfit looking to catch the Mets in the NL East standings. Aaron Nola sucked his first start out of the break against the injury-riddled Yankees. I’m expecting much better from the veteran right-hander this time around!

Yu Darvish has been nothing if not ordinary throughout his last three starts. He’s pitched through the sixth inning only once during that stretch. More importantly, he only amassed a grand total of 13 K in his last 14.2 innings of work. That’s highly unlike him considering the righty is the owner of a 10.4 K/9 for the season. Enter the Miami Marlins; a team that ranks out in the bottom third of a majority of key offensive stats that owns a 28 percent K rate against right-handed pitching. Look for Yu to get back on track and surpass his K prop in the process.

Saving the best for last with Lance Lynn set to square off against Brandon Woodruff in the finale of the division leader’s three-game set in Milwaukee. ESPN picked a good pairing for this week’s Sunday Night Baseball telecast! As great both starting pitchers have been, I like the White Sox offense much better in this heavyweight bout. As lights out Woodruff has been of late, he hasn’t gotten much from his offense. That will be the ultimate decider of this tilt with both hurlers expected to go deep in this one. Back Chicago and also target the over of Lynn’s K prop with the Brew Crew striking out against right-handed pitchers at the highest clip in the majors – Slam Your Man!