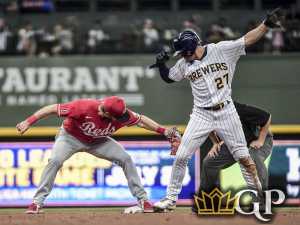 Though Mother Nature wreaked havoc for the second time in as many weeks, my Weekend MLB Best Bets still went on to make bank after compiling a 6-1-2 overall record. Let’s keep the good times rolling this weekend with more weekend MLB Best Bets!

Though Mother Nature wreaked havoc for the second time in as many weeks, my Weekend MLB Best Bets still went on to make bank after compiling a 6-1-2 overall record. Saturday saw us split the F5/FG under in the Blue Jays/Rays game. How it ended up staying under the closing total is beyond me after five runs were scored through the first three innings. Both positions in the Pirates/Mets game were wiped out due to the doubleheader, and the play on the Nats was scratched after Joe Ross hit the IL out of nowhere. Sunday was a fun day to say the least! It kicked off with easy under cashes on the F5/FG in the matchup between Luis Castillo and Brandon Woodruff; a game ultimately won by the Reds 3-1. It looked like we had a loser with Framber Valdez in the afternoon, but Houston somehow managed to plate six in the bottom of the ninth to afford us the push on the -1 run-line. We then swept all three positions on the Giants -1, over Gausman’s K prop and the Nats under their team total versus the Redbirds. The showing pushed my best bets to 53-29 for the season. I’ll be keeping it brief this week not knowing what a majority of the pitching matchups are at the time of this writing. Regardless, let’s keep the good times rolling this weekend!

The Brew Crew went into the break owners of a 4-game lead atop the NL Central standings. The Reds are the team that clocks in behind them, and the ‘Natti just so happened to be playing some spectacular baseball heading into the ASB. They closed the first half by taking three of four from Milwaukee in Miller Park. Luis Castillo weaved in and out of traffic versus the Brewers last time out. Though he only allowed four hits, he issued six free passes. In four starts against Milwaukee this season, the right-hander has allowed 12 hits and 16 walks through 23 combined innings yet his ERA sits at 3.52 and BAA at .154. Dominant no doubt, but I’ll be betting on the Brewers breaking through this time around. Should Woodruff, Burnes or Peralta toe the bump, it would only be the cherry on top!

Jake Odorizzi has been pretty decent his last two turns in allowing 11 hits and only 3 ER with a 6:2 K/BB ratio over 12 combined innings. They amounted to being his only two quality starts of the season. The righty has had the benefit of throwing at some truly impotent offenses in a bulk of his 2021 starts. That won’t be the case versus a Pale Hose attack that ranks No. 6 overall against right-handers in batting .255 and averaging a healthy 4.8 runs per game. They’ve won 36 of those 63 played games! Chicago will also have the benefit of having staff ace Lucas Giolito take the bump in his first start of the second half. While the righty has been a bit more hittable this season, his changeup is still one of the best in the game which has allowed him to rack up 125 K in 104 innings. My only hang-up has been his inability to go deep into games with only 44 percent being of quality. Even so, Chicago sports the much better overall bullpen. Lay the intermediate chalk with the home team!

Only the Cubs, Brewers, Tigers and Rays have struck out more times than that of the Miami Marlins this season. Against right-handed pitching, the Fish have gone down on strikes 599 times in 2091 at-bats; that’s a near 29 percent K rate folks! If you’ve read my stuff this baseball betting season, you know I’ve been riding Zack Wheeler way before he jumped up the NL Cy Young futures odds betting board. The dude’s been nothing but money in the bank when attacking his K props. Though he failed to surpass his total last time out against the Cubs, he did so in seven of his previous eight outings. In his lone appearance against Jazz Chisholm and company this season, he racked up 10 Ks and allowed one unearned through seven innings. I’m expecting another big tally in his second half debut and will hit the over accordingly.

The finale between the Friars and Nats brings with it one of the best pitching matchups of the weekend with Joe Musgrove set to square off against Max Scherzer. However, the Padres right-hander has really struggled over the last 30 days in allowing 7.5 hits per nine innings while only registering an average of 6.8 K/9 during that same stretch. In his last two starts, he’s conceded 4.2 walks per nine innings! On the flipside, Mad Max had been dealing up until his most recent start against these same Padres who roughed him up for five hits (2 HR) and 7 ER through only 3.2 innings. Before that, the righty had conceded a grand total of 3 ER and 11 hits in his previous 17 innings over three starts. I’ve been riding the Nats over the last month and fully expect this team to make a run at the NL East pennant. So much so that I bet Washington’s readjusted season win total over 78.5 and also took a stab on them at +1000 to qualify for the playoffs. Look for Scherzer to get his revenge and lead the Nats to a win in the series finale.