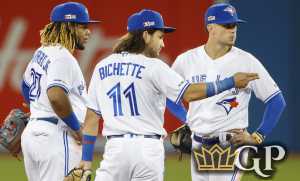 While we didn’t kill it, my Weekend MLB Best Bets still produced a profit after going 4-2-2 last week. That pushed my best bets to 47-28 for the season. Hopefully the good times keep rolling this weekend!

While we didn’t kill it, my Weekend MLB Best Bets still produced a profit after going 4-2-2 with the expected pitching matchup in the Sunday nighter between the Mets and Yankees being no action due to Mother Nature wreaking havoc on the series; there were still 4th of July fireworks as expected. The Reds got us in the win column to kick Saturday off. Though we were lucky to push the F5, Cincy went on to win the game 3-2 late. We followed it up with a clean sweep of the F5 and FG under in the Miami/Atlanta matchup that pitted Sandy Alcantara up against Kyle Muller. It would’ve been a clean sweep had a lengthy weather delay not taken the wind out of the Nats’ sails after tying the Dodgers at three in the bottom of the fourth. Three hours passed until the game resumed and LA came out victorious. Freddy Peralta kicked Sunday off with a win after just barely going over his 6.5 K prop. If not for five walks, he would’ve shattered it! That series between the Cardinals and Rockies was strange to say the least. All four games combined for low scorers. Though the Rox pushed the -1 run-line with German Marquez on the bump, they still grossly failed to surpass their 5.5 run total in the 3-2 win. The 4-2-2 showing pushed my best bets to 47-28 for the season. Hopefully the good times keep rolling this weekend!

This should be a fun one in the third meeting of the season between Robbie Ray and Ryan Yarborough. The Rays have been Ray’s kryptonite. He’s made three starts against them, but owns a 0-1 record regardless of firing 20 innings of 16 hit and 6 ER ball against them. Oh yeah, he’s also tallied 22 strikeouts to just two free passes. Yarborough’s 1-0 with a 2.16 ERA, 0.66 WHIP and .169 batting average against in the 16.2 innings thrown at the BJ’s. When opposing left-handed pitching, both teams stand a combined 32-23-2 to the under for the season. With that, I’ll be attacking this matchup on three fronts; Over Ray’s K prop, the under in the F5 and the under for the full game. Hopefully an under ump with a wide K zone settles in behind the dish!

First off, I’d very much so like to thank Tyler Anderson for going HAM out of nowhere this past Sunday to allow me to log the win in my fantasy baseball matchup. The seven innings of shutout ball with 6 Ks was greatly appreciated! That said, I’ll be fading the left-hander in his next start in New York against a Mets team that’s rediscovered how to hit a baseball now that the everyday lineup is back to being near full health. Coincidentally, I dropped Anderson to stream Tylor Megill for this start with the young flamethrower mowing the opposition down since getting called up. The right-hander’s allowed just 10 hits and 6 ER with a 19:6 K/BB ratio through 14.1 IP against the Brewers and Braves; much tougher offenses than he’ll oppose today. Hit NY on the -1 run-line if it’s laying more than -150 chalk on the moneyline.

Though the Nats let me down last weekend against the Dodgers, I’m firing right back on Davey Martinez’s squad in Game 2 of the series against the NL West leading Giants. If you haven’t noticed, Washington has been playing some inspired baseball of late to propel itself right back into the NL East pennant race. On the other hand, San Fran has been leaking some oil in dropping six of its last 10 games. Since struggling the first two months of the baseball betting season, Joe Ross has really upped his game. He went 3-2 with a 1.95 ERA and 0.93 WHIP through five June starts, and more than held his own against LA last time out allowing 3 ER while striking out 11 through 6.2 innings. Tony Disco has been great dancing his way to a 2.84 ERA and 9-3 record, but Washington at an underdog price is the way to go in this premiere bout. Let’s hit the Nats on the F5 and FG and see where this rabid dawg takes us!

You know I love fishing for unders on “Getaway Sunday” if you’ve been reading this piece heading into every weekend over the last couple months. While this isn’t a normal Sunday with it being the last one before the season heads into the All-Star break, I still love the prospects of both Luis Castillo and Brandon Woodruff putting on a pitching clinic in the series finale between the Reds and Brewers. Cincinnati’s home/road splits are eye-opening! It averages 5.5 runs in the GAB and 4.3 on the road. Woodruff allowed 6 ER to the Reds over 15.2 IP in three starts last season. Castillo has been tremendous since the calendar flipped to June in allowing only 27 hits and 10 ER with a 42:16 K/BB ratio over his last 35 IP. You know what to do – hit the F5 and FG Under!

When handicapping Sunday’s pitching matchup between Jameson Taillon and Framber Valdez, you must ask yourself what was real and what was fake in each respective hurlers most recent start. Are you buying into Taillon tossing seven innings of 1 ER ball with 9 K at the Seattle Mariners, or are you now down on Valdez who got rocked for 10 hits and 5 ER by a solid Oakland A’s offense? Before that outing against the A’s, Valdez had conceded a grand total of 11 ER over 52 innings. As for Taillon, the stint was his longest of the season and it had everything to do with changing his mode of attack against a Mariners offense that can’t hit right-handed pitching (No. 26). Guess what, Houston ranks No. 2 against righties! Hit Houston on the -1 run-line to win the series finale.

As much as I love what the Nationals have been doing recently, I can’t help but fade them in this spot against the Giants. Jon Lester has been better recently in allowing two or less ER in six of his last eight starts. However, he’s run up against the Padres, Rays and Marlins in his last three turns and each of those teams rank in the bottom third of the league against left-handed pitching. San Fran clocks in at No. 17 while going 15-10 and averaging 4.4 runs per game. But the kicker and main reason why I’ll lay the -1 run-line in this one is because of Kevin Gausman. Sitting 8-3 with a 1.74 ERA, .157 BAA and 10.3 K/9, the right-hander is a legit threat to Jacob deGrom at winning the NL Cy Young Award. At least my ticket on him to do so at 28-1 says so! Look for the Giants staff ace to close out his first half in style. Bet the Giants on the -1 run-line, over Gausman’s K prop and the Nats team total under - Good luck and Slam Your Man!