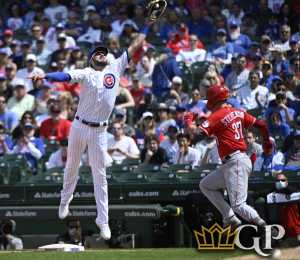 My Weekend MLB Best Bets killed it once again last week as we went on to sweep the board on Saturday and followed it up with a 2-1 showing on Sunday. Here’s to adding to our 43-26 overall record with some more Best Bet ticket cashes this holiday weekend.

My Weekend MLB Best Bets killed it once again last week as we went on to sweep the board on Saturday and followed it up with a 2-1 showing on Sunday. The Buccos and Red Birds kicked it all off with a dead nuts under for the F5 and FG in the matchup between Brubaker and Wainwright. Hyun-Jin Ryu cruised against Baltimore and logged the win. The day closed out with a sterling performance from rookie Zach Thompson who racked up 11 K through six innings to help lead Miami to the win as short home dogs against Patrick Corbin and the white hot Nats. We hooked another F5 and FG under on getaway Sunday in the finale between Washington and Miami. Unfortunately, Zack Wheeler rose to the occasion and surpassed his K prop in the revenge bout with the Mets to hand us our only defeat of the weekend. The “pitcher to win” prop on Dallas Keuchel and the White Sox was washed out due to Mother Nature. Here’s to adding to our 43-26 overall record with some more Best Bet ticket cashes this holiday weekend!

As great a month of May the Cubs churned out, I knew the regression fairies would catch up to them sooner or later. It’s been bad of late, real bad! Chicago now finds itself 6-games out of first place after dropping a sixth straight to the Brew Crew on Wednesday in a game Chicago actually got out to a 7-0 first inning lead in. Adbert Alzolay has been serving up batting practice since returning from the IL in allowing eight hits and 7 ER through 7.2 IP. On top of that, he’s served up a pair of home runs in each start. Cincy ranks No. 4 in the league against RHP, and Tyler Mahle will be out for some revenge in this one after the North Siders ripped him for nine hits (3 HR) and 6 ER in his GAB start against them back on May 2. He followed that up with five innings of one-hit shutout ball at Wrigley on May 30. Cincy owns the starting pitching advantage and I fully expect Nicholas Castellanos and the gang to hang a crooked number. F5/FG the Redlegs!

Sandy Alcantara has made two starts against the Braves this season with each going on to be of quality. Through 12.1 total innings, the righty has conceded nine hits and 5 ER with a K/BB ratio of 10:5. Atlanta is hitting just .205 against him. Both games managed to push against the closing total with one of the matchups being decided in extra innings. Alcantara owns a 2.90 ERA and .176 BAA through five lifetime starts against Atlanta. Opposing him will be left-hander Kyle Muller who’s bounced back nicely in his last two starts holding the Mets and Reds to two hits and 1 ER while racking up a 12:4 K/BB ratio. Miami’s hitting .228 as a team against LHP (No. 23) and averaged just 3.9 runs per game (No. 22). So long as an under ump situates himself behind the dish, I’ll take a stab with the F5 and FG under.

I love what I’m seeing from the Nationals right now. Since June 13, Davey Martinez’s troops have rattled off wins in 14 of their last 17 games to propel themselves right back into the thick of the NL East pennant race. Kyle Schwarber continues to swing a scorching hot bat, while Juan Soto looks to finally be hitting his stride. While the same can be said for the Dodgers, I’m not buying Clayton Kershaw when installed decided chalk away from Chavez Ravine. I’ll fade him in this spot against a lesser pitcher in Paulo Espino and hope the Nats continue their winning ways.

I hit the over of Freddie Peralta’s K prop earlier in the week against the Chicago Cubs. He come one short of surpassing the 8.5 impost. Reason being, home plate ump Jeff Nelson squeezed him on a pair of what should’ve been called strike threes in the sixth inning. Oh well, I won’t hold a grudge. Instead, I’m firing right back with Peralta set to square off against a Buccos offense he tallied seven strikeouts against through five innings back on April 18. He’s held Pittsburgh to a .095 BAA over 24.1 career innings and logged 31 Ks. After the Pirates got to him for three hits (1 HR) and 3 ER in that earlier start, I fully expect him to be gunning for the shutout in this one. Hit the over on his K prop and don’t be surprised if he goes for 10+!

Carlos Martinez is nothing short of a dumpster fire right now. Sure, he just held the D’backs to four hits and 1 ER through six innings his last time out to stop the bleeding, but Arizona is the worst team in the league right now. Before that, he conceded 31 hits and 30 ER in his previous five starts that amassed a grand total of 19.2 innings. On the flipside, German Marquez is in a zone having allowed just four hits (1 HR) and 1 ER over his last three starts spanning 23 innings since getting blasted in Cincinnati. Colorado might sit 13 games under the breakeven point overall, but it’s the owner of a 28-16 record in Coors. This is a huge pitching mismatch that I plan to take advantage of fully. Hit Colorado on the -1 run-line as well as its team total over.

What would the Fourth of July be without fireworks? I fully expect Tylor Megill and Michael King to offer them up in the finale of the “Subway Series” between the Mets and Yankees on Sunday Night Baseball. Don’t read too much into Megill’s .222 BAA as both of his starts came against the schizophrenic Braves offense. The Yanks have clubbed RHP to the tune of a .255 average and .812 OPS over the last week. Look for Aaron Judge and company to tee off right from the first pitch! Same goes for the Mets who get to take their hacks against Michael King and his inflated 4.68 ERA and 1.56 WHIP in night games. While the Mets have struggled against righties over the last week, King isn’t cut from the same ilk as guys like Charlie Morton, Zack Wheeler or Aaron Nola. King’s stuff should be a welcome sight for Pete Alonso and company. Hit the F5 and FG over and enjoy the show - Good luck and Slam Your Man!