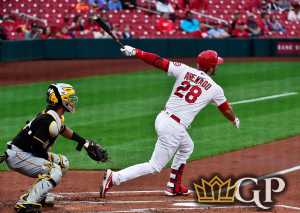 It was another banner showing for the Weekend MLB Best Bets as we posted a 6-2 record and had a good ‘ol time taking it all in. Here’s to improving upon the 37-25 overall record with some more Best Bet ticket cashes this weekend!

It was another banner showing for the Weekend MLB Best Bets as we posted a 6-2 record and had a good ‘ol time taking it all in. Alek Manoah managed to surpass his K Prop before getting ejected from the game. Unfortunately, the O’s also eclipsed their run total. Framber Valdez allowed for us to cruise to a win after dominating the Chicago White Sox. Saturday’s matchup between St. Louis and Atlanta got pushed to Sunday. Though Wainwright’s start only went seven innings, it still went over with ease. That win was erased with a poor effort from Taijuan Walker and the Mets who allowed Kyle Schwarber to launch three home runs. We bounced back nicely later in the afternoon with a nice dog ticket on the Detroit Tigers and then cashed the F5/FG unders in the matchup between Luis Castillo and Dinelson Lamet in Petco. Here’s to improving upon the 37-25 overall record with some more Best Bet ticket cashes this weekend!

I’m banking on the starting pitchers showing out and the bullpens seeing it all the way through in the third game of the extended series between the Buccos and Redbirds. Since getting blown up for 7 ER and 3K through 5.1 innings in Atlanta back on May 23, Brubaker has been locked in over his last four starts in allowing 16 hits and 7 ER with a K/BB ratio of 21:3. Wainwright took a sip from the Fountain of Youth in the offseason evidenced by his 3.74 ERA, 3.98 FIP and only allowing 7.5 hits per nine innings. Both offenses suck. Look for the pitching to dominate and lead to ticket cashes on the under for the F5 and FG.

The O’s have been one of the best in the league against left-handed pitching. Cedric Mullins and company rank second in batting average behind only the Astros against south paws, while their .781 OPS clocks in at No. 4. Even so, it’s only amounted to a 9-16 overall record. Hyun-jin Ryu just threw at the Orioles in Baltimore last week and went on to log the quality start by tossing seven innings of 1 ER ball while allowing three hits and striking out four. While Baltimore will be more confident getting a second look at him, I still think he dominates and earns the win. With that, look for his pitcher to record a win prop and press submit. Doing so limits the liability cost if for some reason he’s off his game the second time around.

The Nats have caught fire and it’s coincided directly with Kyle Schwarber’s bat getting hot. Now just four-games in back of the Mets for division bragging rights, today’s spot creates an excellent opportunity for Washington to eat into that lead against Miami. Especially with Patrick Corbin on the bump looking to churn out a third straight quality start after combining for 12 hits and 3 ER allowed with a 14:2 K/BB ratio in his prior two starts. I’m not buying it! His FIP is nearly 2.5 runs higher than his ERA over the last week, and his K/9 is way over his seasonal output. Miami’s been pretty bad against lefties (7-15), but I’ve liked what I’ve seen from Zach Thompson in his limited work (1.50 ERA/10.5 K rate) enough to take a stab with the home dogged Fish.

I’m going right back to South Beach to kick off Sunday’s slate, and I believe I’ve hooked a solid under play here with Max Scherzer set to square off against Sandy Alcantara. As pissed Mad Max was in his last start to get padded down for illegal substances, he still rocked through his five innings in allowing just two hits and 1 ER while racking up 8 K. He already has nine innings of 1 ER allowed to the Marlins this season to go along with 9 K. Hit the over on his K prop. Alcantara didn’t tally many strikeouts in his last start (3), but he was still rock solid in logging eight innings for the second straight start and allowing just 1 ER. He’s allowed a total of 5 ER over his last four starts since getting shellacked by the Blue Jays. This could be the fastest game on Sunday’s slate, so hit the F5 & FG unders and enjoy a fantastic pitcher’s duel.

The Zack Wheeler revenge game is set to go down in Queens and you know Citi Field will be up in arms over the one that got away. Wheeler is in the midst of his best season as a professional carrying a 2.36 ERA and 2.43 FIP with him into start No. 16. I can’t help but think he’ll be extremely jacked up for this start. However, the Mets are the better overall team and the offense got much healthier this week. Linemakers are likely to post an inflated strikeout total for this one considering Wheeler’s racked up 56 of them over his last six starts (9.3). Even so, I’m gonna fade the right-hander and look for the Mets’ bats to be peskier than expected. Doing so should bring back a decent plus-money return, so enjoy!

For all intents and purposes, Marco Gonzales is a capable big league left-handed pitcher. He’s also had limited success against the White Sox through two career starts in going 2-0 with a 1.46 ERA and 0.89 WHIP. That said, he hasn’t thrown at the Pale Hose since 2018 and Chicago now owns one of the more lethal offenses in the league when running up against lefties. Chicago rakes them to the tune of a .272 batting average (No. 4) and .792 OPS (No. 2). On the flipside, the M’s are tied with the Milwaukee Brewers as the worst hitting team against lefties. Guess what? Dallas Keuchel is a lefty and just so happens to be one that was in a groove before the white hot Astros lit him up. Hit Chicago on the run-line and also bet Keuchel’s pitcher to record a win prop after taking a no decision against the M’s when he opposed them way back on April 7 at Safeco - Good luck and Slam Your Man!