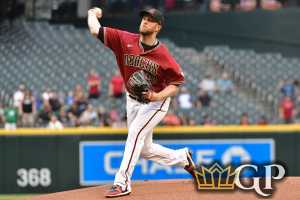 We continue to roll along with the MLB Best Bets, as last week it was a perfect 5-0 effort. That moves us to 24-13 for the season. The following is a 6-pack of MLB Best Bets that hopefully continues adding to the bottom line through the weekend.

Mother Nature just wreaked havoc upon my MLB Weekend Best Bets. Though two of my games were ultimately washed away, we still went on to cash every other position to fatten up the bankroll nicely. Saturday kicked off with an easy ticket cash on the over of Zack Wheeler’s K prop. I seriously laughed out loud when I saw the books release it at 7.5 and a plus-money return, he went for 14! The matchup between Gomber and Brubaker ultimately got split into a doubleheader. Didn’t matter, both games went comfortably under the impost so I hope you adjusted and still banked. The night closed out with a win on Seattle who scratched out the 3-2 win over the Rangers. Unfortunately, Justin Dunn hit the IL immediately after due to biceps inflammation. Getaway Sunday saw us take advantage of another easy under spot between Brandon Woodruff and Max Scherzer. The F5 and full game unders cashed with ease! The Toronto/Cleveland pitching matchup got washed away, but we closed the weekend out with another easy ticket cash by fading Blake Snell and riding Greinke and the Astros. The 5-0 effort moves us to 24-13 for the season. The following is a 6-pack of MLB Best Bets that hopefully continues adding to the bottom line through the weekend.

Freddy Peralta and his 5-1 record and 2.38 ERA are going to be installed hefty favorites to defeat the Arizona Diamondbacks. How could they not with the D’backs losers in 18 of their L/21 games? But it won’t be the moneyline that we’ll be targeting in this matchup. Heck, it won’t even be Freddy Peralta! It’ll be Merrill Kelly’s K prop. The right-hander has been a mild bright spot in a bleak Arizona starting rotation having allowed three runs or fewer in his seven starts leading up to Monday’s head scratcher against the Mets. His 9.7 K/9 should play well against a Brewers lineup that ranks No. 27 in K rate against right-handed pitching. After spitting the bit against the Mets, I’m expecting a resurgent effort to match what Peralta brings to the bump.

So did anyone see this coming from the Cubs? After putting forth a bothersome 11-15 record in April, Chicago catapulted itself into the catbird seat of the NL Central by posting a 19-8 record in the month of May. It’s also logged two more wins to kick off June after busting the brooms out on San Diego. Now it heads out west to Oracle Park – a venue they’re just 4-6 L/10 – to battle the biggest moneymakers in the game. San Francisco will send NL Cy Young contender Kevin Gausman to the bump to square off against spot starter Kohl Stewart. Advantage Giants; BIG! So long as Gausman’s hip injury doesn’t prevent him from making the start, I’m all over the Giants on the money and run-line. Use SFG as a confident parley leg if you refuse to lay heavy chalk.

I’m expecting copious amounts of fireworks to go off Saturday night when Cole Irvin squares off against Kyle Freeland in the meat of the series sandwich between the A’s and Rox. Irvin has conceded 24 hits and 13 ER while logging a pedestrian 6:3 K/BB ratio over his last three starts spanning just 15.2 innings. Freeland has been pretty awful in his two starts since being called up from Triple-A pitching to a 4.50 ERA and 2.00 WHIP through eight combined innings against the weak offenses of the Mets and Pirates. With it starting to get warmer outside, balls will start flying out of Coors once again. These gas cans paired with both teams ranked amongst the Top-12 in OPS against left-handed pitching should see a crooked number hit the board.

Set it and forget it. I’m talking about Woodruff’s K prop on Sunday against a Diamondbacks offense that ranks No. 28 in K rate when running up against right-handed pitchers. Woodruff has become one of the more dominant righties in the K department having racked up 83 of them through his 71 total innings of work. The righty has logged at least 8 K in four of his last five trips to the starting bump, and he’s tallied 12 in 10 innings thrown at the Snakes in his career. Look for another big tally to be scored once this ones said and done.

With every start those goes by, I continue to wonder when the regression fairies pay Mr. Gant a visit. The right-hander has been getting it done with smoke and mirrors pitching to a 1.60 ERA and .232 BAA regardless of owning a 39:34 K/BB ratio. How much longer can his absurd strand rate last? My guess is not much longer and this looks to be as good a spot as any to test the waters with Nick Castellanos and the Reds routinely teeing off on right-handed pitching to the tune of a .331 OBP (No. 3), .435 SLG (No. 3) and .766 OPS (No. 3). Cincy also has the benefit of seeing his stuff once this season. Though they only managed three hits and were shutout through six innings, I’m betting against the same outcome playing out the second time around. Miley should also be locked in after suffering the loss that day. Look for the Redlegs to even the score!

It’s getaway Sunday and if you’ve been reading this piece for the last month-plus, you know I’m always fishing for unders on the day of rest. The finale between the Cubs and Giants fits the parameters with Kyle Hendricks squaring off against Johnny Cueto. The former has been in quite the groove since getting bludgeoned by the Braves at the end of April tossing quality efforts in all but one of his last six starts. The latter has conceded 2 or less ER in three of his last four starts and will hit the bump on Sunday looking to log a third win in his last three. Hendricks owns a career 2.22 ERA at Oracle Park and 2.13 ERA through eight career starts against the Giants. Cueto has owned the Cubs ever since his Cincinnati Reds days – under she goes both F5 and FG!