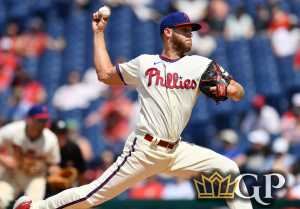 We’ll head into the weekend 19-13 overall and up units overall. The following is a 6-pack of MLB Best Bets that hopefully continues adding to the bottom line through the weekend.

My MLB Weekend Best Bets started off nicely. Though we split the White Sox/Yankees game with the over on Cole’s K prop and under Chicago’s team total, we went on to easily cash the next three positions with the over in the O’s/Nats F5 and game as well as the Royals. Unfortunately, Sunday didn’t play out as lucratively. We started it all off with cashes on the F5 and full game under in the showdown between Eduardo Rodriguez and Zack Wheeler, but then went on to lose the next three on the Reds, Astros and Cristian Javier’s K prop. In all, we ended up 6-4 for the weekend but had an opportunity to gain so much more. What the heck is going on with Luis Castillo?! And what was up with all those Javier walks?! It ultimately cost him his spot in the rotation; much to the chagrin of my fantasy team! We’ll head into the weekend 19-13 overall and up units overall. The following is a 6-pack of MLB Best Bets that hopefully continues adding to the bottom line through the weekend.

A quirky schedule finds both the Phillies and Rays off on Friday for a two-game weekend set that starts Saturday and goes through Sunday. The 2021 MLB schedule is bonkers! Regardless, Wheeler and his miniscule 2.38 ERA and 10.3 K/9 are set to square off against Michael Wacha in the opener. I’m not targeting any side or total in this one, but will instead hone in on Wheeler’s K prop at online sportsbooks with him highly likely to tally a big number against a Tampa Bay squad that leads the league in strikeouts with a whopping 539. Wheeler’s gone for 10 and 12 Ks in his last two starts, and I’ll be betting on that streak continuing in The Trop!

This is definitely not the most attractive matchup on the betting board with both teams’ owners of less than 20 wins heading into Friday’s series opener. But that’s what I like about it. This has all the makings of turning into a sneaky pitcher’s duel with Austin Gomber set to square off against JT Brubaker. The former just tossed 8 innings with 8 K in Queens to log his third win of the season against an injury riddled Mets offense executing similarly to the Pirates laughable attack. Colorado’s offense has been wretched away from Coors (2.7 RPG), so Brubaker is in line for some positive regression after being forced to deal with the Braves, Cardinals, Reds and Padres in his last four starts. Hit the F5 and full game under with confidence!

Mike Foltynewicz is a shell of his former self. No longer does he rack up strikeouts at the furious rate he once did when a member of the Atlanta Braves. It looks like he’s sacrificed more control for speed and it’s shown with his BB/9 clocking in at 2.4. I’m simply not a fan. What I do like however is the up and coming Justin Dunn who’s been a bright spot on a Mariners squad whose future looks bright. In this battle of teams that’ve already been no-hit twice this season, I’m attaching my wagon to Dunn who’s allowed two or less ER in each of his last four starts.

It’s getaway Sunday so you know what that means - We’re fishing for unders! The premiere pitching matchup of the day pits the Brew Crew’s Brandon Woodruff up against the Nats Max Scherzer in a terrific battle of right-handers. Woodruff enters this start 3-2 with a 1.41 ERA and 0.70 WHIP. He also sports a 10.3 K/9 and is allowing less than five hits per nine innings. Each of his last nine trips to the bump resulted in quality starts. Though Mad Max has become a bit easier to hit in his later years, he’ll be determined to put forth a gem here coming off a tough-luck loss to the Reds in a game he only conceded five hits and 2 ER while striking out nine. With Milwaukee god awful against righties (No. 29), he’ll be in line for another solid showing. I’ll take the F5 and full game under please and thank you!

I want nothing to do with the Cleveland Indians whenever they’re running up against a left-handed pitcher. Terry Francona’s squad (.213) is only better than Seattle (.200) and Pittsburgh (.212) when running up against a southpaw, and that isn’t saying much. On the flipside, Toronto has raked right-handers to the tune of a .254 BAVG, .320 OBP, .433 SLG and .753 OPS. While Matz has been an enigma this season, he finds himself in an envious position against the Tribe’s impotent bats. The same can’t and won’t be said for Aaron Civale – gimme the BJs!

Is Blake Snell ever going to find it again? Through 10 starts, the right-hander is the owner of a 4.50 ERA, 1.52 WHIP, 5.7 BB/9 and has allowed at least 1 HR in all but four starts. You know who crushes right-handed pitching to the tune of a .415 SLG and .740 OPS? If you said the Houston Astros you’re right! It looks like Jose Altuve and the gang is going to have a good ‘ol time adding to Snell’s woes in the series finale! While I’m not the biggest fan of laying chalk with Zack Greinke, he is the preferred arm to back in this matchup regardless of San Diego also being ranked amongst the top-10 of the league against righties (.240 BAVG/.713 OPS). Regardless, I’ll lay it with one of the best home teams in the Bigs.