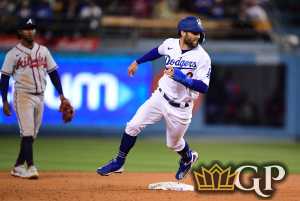 The Los Angeles Dodgers visit the Atlanta Braves on Sunday night on ESPN. The teams met earlier this season in a three-game series in Los Angeles and the Dodgers took two of the three games. Let’s look at Sunday night baseball picks.

The Dodgers have an excellent pitching staff but the names leading the way are not the ones you are accustomed to. You won’t see Walker Buehler and Clayton Kershaw at the top of the Los Angeles rotation, as Buehler is hurt and Kershaw has been in an out of the lineup due to injury. It is now Gonsolin and Tyler Anderson leading the way. Gonsolin has been outstanding this season with a 9-0 record and a 1.58 ERA. The one thing you don’t get with Gonsolin is a lot of innings. He usually just pitches six innings so the Los Angeles bullpen will be a factor. The good news for the Dodgers is that their bullpen has been excellent.

On the other side, the Braves send Spencer Strider to the mound. He is 3-2 with a 3.40 ERA this season. He didn’t pitch well last time out, as he gave up six runs in just 3.2 innings against the Giants.  Strider has been pretty good for the Braves, so perhaps that start was an aberration.

There is no question that the pitching edge on Sunday night goes to the Dodgers. Gonsolin has been outstanding all season. It is slightly concerning that he doesn’t pitch deep into games, but the Los Angeles bullpen has been solid. I am not thrilled about who the Dodgers are using as their closer, as I don’t think Craig Kimbrel is a reliable closer any longer, but overall, the Dodgers have a good bullpen. I’ll go with the Dodgers in this contest and I also have to hedge a little bit. This has all the looks of a low scoring game. Strider is definitely capable of pitching well and Atlanta is at home. I expect him to keep the Braves in this contest. It is also important to note that the Dodgers are currently without Mookie Betts who is injured. With Gonsolin on the mound the Braves can’t afford to give up much if they expect to have a chance to win. I will also take this game to go under the total.