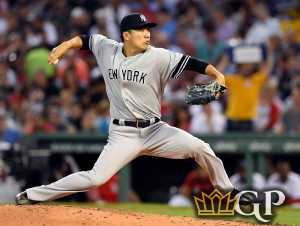 One of the best rivalries in all of sports will venture into unchartered water starting Friday night when the Boston Red Sox and New York Yankees do battle in The Bronx for the first time in this pandemic shortened season. Let's look at baseball picks.

One of the best rivalries in all of sports will venture into unchartered water starting Friday night when the Boston Red Sox and New York Yankees do battle in The Bronx for the first time in this pandemic shortened season. Mother Nature and the coronavirus have forced the Yanks to miss a few games early on, but the initial results dictate a team worthy of being held in such high regard by oddsmakers. As for the Red Sox, it’s been a tough start to the Ron Roenicke regime with the club only just halting a four-game losing streak by the skin of their teeth against the Mets on Wednesday night. It’ll be interesting to see how the BoSox’s shaky starting pitching staff and laughable bullpen holds up against the Pinstripes unforgiving offense throughout this series. New York owned this rivalry last season in taking 14 of the 19 with the over cashing in 10 times at online sportsbooks; the Yankees also went a lucrative 8-1 as hosts.

Weber took to the bump in his season debut looking to prevent the Baltimore Orioles from winning back-to-back series at Fenway. It didn’t happen. The righty immediately gave up a 2-run bomb in the 1st inning and another 5 ER before departing after just 3.2 innings of work. This will be his first-ever start against the Yankees. In three appearances he’s allowed 4 hits and 2 ER with a 4:1 K/BB ratio through 6.1 innings. He’s been much better against right-handers throughout his career and is yet to give up a hit to Gleyber Torres, Aaron Judge or Gary Sanchez.

All eyes will be on left-hander Jordan Montgomery when he toes the bump for a start for the first time since 2018. Now a year and change removed from his Tommy John surgery, the south paw will look to make up for lost time. His ability to utilize the changeup effectively allows him to rack up a ton of strikeouts, but he’s also proved to be very hittable and adept to giving up the long ball. He’s yet to earn a decision against the Red Sox through three career starts in which he’s the owner of a 4.40 ERA and .222 BAA through 14.1 innings of work.

Boston is yet to announce a starter for Saturdays night’s tilt, but it’s possible Roenicke decides to hand the ball off to Zack Godley who performed admirably last time out against the Mets in mop-up duty. He ended up tossing four shutout innings and allowed 4 hits while registering 7 Ks. His cutter and curveball had the Mets guessing all night. It’ll be quite the sight to see if he can do the same against the other team from New York.

Due to taking a line drive to the head off the bat of Giancarlo Stanton, this will be Tanaka’s first start of the 2020 MLB betting season. The veteran has seen plenty of Boston over the course of his career, and the results have been tough to stomach; last year was nothing short of a nightmare! In three total starts, he went 0-1 with an insane 24.75 ERA and 3.63 WHIP. There isn’t a power bat in the Red Sox’s lineup that hasn’t hit him hard. It might be a good idea to target Boston’s team total in this one!

Heavily reliant upon his curveball to keep opponents guessing, Hall will take to the bump for the second start of his MLB career in front of a nationally televised audience on Sunday night. Think he’ll be a bit nervous? His first-ever MLB start didn’t go to well last Tuesday night when he surrendered 3 ER and 3 hits through just 2.2 innings. The lefty will have his hands full dealing with a bevy of unforgiving righties littered throughout the Bombers’ batting lineup.

The Big Maple’s 2020 debut was one to sweep under the rug. The burly lefty lasted just 1 inning and got lit up for 5 hits and 3 ER by the Washington Nationals. He’ll look to rebound against a Boston team he dominated last season in going 3-1 with a 3.28 ERA and 34:7 K/BB ratio over four starts. He will however be extra careful when J.D. Martinez comes to the dish with Boston’s right-handed power bat 7-for-17 against him lifetime with four extra base hits (2 HR) and 5 RBI. Paxton went 7-3 through a total of 15 home starts in 2019.