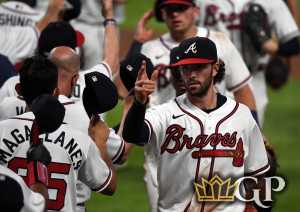 A huge weekend series is in store for fans of the NL East with the Philadelphia Phillies and Atlanta Braves set to square off for the second time this season. The division rivals took part in an extended series in the City of Brotherly Love back in early August with the outcome playing to a stalemate. This time around, the Phillies hold the upper hand with two staff aces set to take the bump, while Atlanta counters with the undefeated and locked in Max Fried on Friday night. Philly has taken six of the last 10 overall meetings, and Atlanta is dealing with numerous injuries to key offensive weapons. With that, you should entertain the thought of backing Philly as the series winner regardless of it taking place away from the comforts of CBP.

Though Nola took a loss and no decision in his first two turns against the Marlins and Yankees, it wasn’t because of the effort. The righty limited each squad to eight hits (2 HR) and 5 ER combined while racking up a tidy 19:1 K/BB ratio. The issue was a lack of offensive support. That wasn’t a problem over his last two starts with the bats erupting for 19 combined runs against the Braves and Mets. Unsurprisingly, he notched a pair of wins to improve to 2-1 with a 2.05 ERA and .148 BAA. Save for a 2nd inning Travis d’Arnaud home run, Atlanta did absolutely nothing against him with it limited to just two hits and 10 strikeouts. The win moved Nola to 11-5 with a 2.82 ERA lifetime against Atlanta.

With Mike Soroka ripping his Achilles a few weeks back, Fried is now Atlanta’s staff ace. The young left-hander has taken the challenge head on and excelled in going a perfect 3-0 through five starts with a 1.24 ERA and miniscule .173 batting average against. He didn’t concede a single run in his last two turns against the Phillies and Marlins, but longevity has been an issue. Fried is yet to pitch through the 7th inning and is averaging less than six innings per start. Walks have been the reason why as he hovers around a 3.0 BB/9 average. That wasn’t an issue when he ran up against the Phillies back on August 9 with just one free pass issued, but he still only managed to go five innings. Still, he moved to 2-2 with a 4.55 ERA and .286 BAA over 10 career starts against the Phillies.

So far, Wheeler has made upper management look like geniuses for ponying up the five-year $124M contract needed to bring his services over from the division rival Mets. Through four starts, the righty stands an unblemished 3-0 with a tidy 2.81 ERA and .272 BAA. He’s only allowed 8 ER through 25 innings, but the 25 hits allowed and surprising 12:6 K/BB ratio is mediocre to say the least. He has however allowed Joe Girardi to limit the damage his league-worst bullpen can do by going seven innings twice and coming one out short of going at least six innings in every start. He has however had some issues with the Braves lineup evidenced by his 4.04 ERA, 1.48 WHIP and .518 BAA through 84.2 innings over 14 starts.

The Phillies have crushed left-handed pitching to the tune of a .266 batting average and .886 BAA over a decent sample size of 188 at-bats heading into Friday’s series opener. That’s what will await Erlin on Saturday night when he toes the starting bump for Atlanta the second time in 2020. Forced to come out of the bullpen, the lefty looked dominant in his first turn against the Marlins whom he held to just one hit and no ER through four innings while registering 5 Ks. That said, Miami’s offense wasn’t at full strength and has recently been in a rut since cooling off. The Phillies will present an entirely different challenge, but he’s held his own against them in the past in going 1-1 through three starts with a 3.00 ERA and 0.92 WHIP.

Eflin has been nothing short of replacement level over the course of his career, and 2020 has been no different. The righty has served up 16 hits (2 HR) and 8 ER through 14 total innings, but his solid 23:5 K/BB ratio has limited the damage to his counting stats. Even so, he’ll make his fourth start of the season the owner of a bloated 5.14 ERA and 1.50 WHIP with the opposition batting .281 against him. He’s 3-3 with a 3.66 ERA and .559 BAA through seven career starts against the Braves, but gets the benefit of not facing Acuna Jr., Albies or Markakis who’ve each raked his stuff pretty hard.

After tossing four innings of six hit and 2 ER ball as an opener against the Washington Nationals last time out, Tomlin gets the starting nod for the home team in Sunday night’s series finale. Coming out of the pen and being thrust into the rotation, the veteran right-hander isn’t fully stretched out to log innings so it would be quite surprising to see Snitker ask him to go more than 5-6 innings if he can even go that deep. Should he do so, he might just cement his spot into the rotation so the 11-year veteran will no doubt be going all out to impress. This will be his first career start against the Phillies whom he owns a 4.00 ERA and .300 BAA against through nine innings of relief.