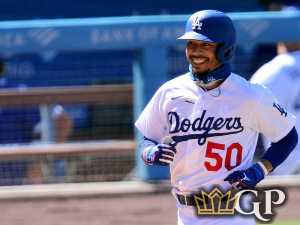 We fared well in the wild-card round correctly tabbing the Los Angeles Dodgers as the favorite to bet and cashed in the longshot as well with the Miami Marlins. The lone loser proved to be the underdog bet on the Cincinnati Reds who did live up to Joey Votto stating the team was a nightmare; it was absolutely horrific watching the offense attempt to score runs against the Braves’ pitching staff! Now that the Elite Eight is in the books, it’s time to turn our attention to the division round in hopes of further bolstering the bank roll. Unlike the opening round where the games took place at the higher seeded teams home field, the division round will take place in a bubble with the Yankees/Rays squaring off in Petco Park, A’s/Astros at Dodger Stadium, Braves/Marlins at Minute Maid Park and Dodgers/Padres at Globe Life Field. Let’s jump into the current MLB series odds offerings and see where the value lies!

Everything lined up perfectly for the Marlins in the wild-card round. The Chicago Cubs might’ve logged the fourth-best record in the National League, but a bulk of those wins came against NL Central opposition. In case you live under a rock, you know all four teams that qualified for the playoffs from that division failed to advance into the division round. As great a story Miami has been to this point of the MLB betting season, it’s glass slipper is about to get cracked by an Atlanta Braves outfit firmly aware of what the team brings to the table. Though Atlanta doesn’t have much in terms of starting pitching past Max Fried and Ian Anderson, it’s bullpen rates out only behind the Dodgers in the National League. On top of that, Freddie Freeman and company flat-out rake right-handed pitching and that’s basically all the Marlins will throw at them at the outset of every game. The fact that the Braves took four of the six regular season meetings leads me to believe they’re a pretty safe bet to advance to the NLCS.

The A’s displayed a ton of moxie by coming back to thwart the Chicago White Sox in the opening round of the postseason. It displayed the heart of a champion in Game 3 by battling back from an early 3-0 deficit to punch its ticket to the ALDS by way of some timely hitting and a collaborative effort out of the bullpen. That’s been the recipe of success for Bob Melvin’s squad all season long, and I don’t foresee it ending in this crucial series against a Houston team it dominated throughout the regular season. The A’s toppled the Astros in seven of the 10 overall meetings, and won those games by an average of 2.7 runs per game. Matt Olson is one of the premiere first baseman in the game, and he’s backed by a number of gamers in the forms of Ramon Laureano, Mark Canha, Marcus Semien and Khris Davis. Oakland also has a number of live arms in Frankie Montas and Jesus Luzardo who could really give Houston’s bats some issues if they get locked back in. Oakland sports by far the better overall bullpen as well, and that’s ultimately going to decide this one with Houston lacking in the starting pitching department due to a number of crippling injuries.

Let me preface this selection by stating I believe the Dodgers have far and away the best roster in the game. No ifs, ands or buts about it. But in a five-game series, the best team doesn’t always win. Jayce Tingler’s squad certainly has the offensive firepower and live arms both in the rotation and pen to spring the upset. Much would have to go right for that to occur however. Most important would be the inclusion of both Mike Clevinger and Dinelson Lamet on the NLDS roster. With that, I’d make it a point to see the final list before putting your money down on the series odds before Tuesday night’s first pitch. If both is deemed healthy enough to go, I’d argue that San Diego’s starting rotation is on par and maybe even better than what the reigning NL West champs bring to the table. Pair that with an unforgiving offense that could go off at the drop of a hat, and the Dodgers near 75 percent implied probability of winning this series is nothing short of ludicrous! As great Fernando Tatis Jr. and Manny Machado have been atop the order, it’s going to take a Herculean effort to advance to the NLCS. I truly believe “Slam Diego” has it in them to pull off the feat, but it’s going to need reinforcements it didn’t have against the weak hitting St. Louis Cardinals to pull it off.