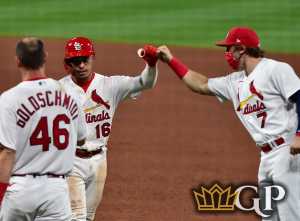 Both the Cleveland Indians and St. Louis Cardinals will enter this weekend’s three-game set brimming with confidence. Let's look at the Indians at Cardinals Series, baseball odds and baseball picks.

Both the Cleveland Indians and St. Louis Cardinals will enter this weekend’s three-game set brimming with confidence. The Tribe just took two of three at home from the Minnesota Twins to claw to within a half game of the AL Central frontrunners, while the Redbirds staged a dramatic comeback walk-off win against the Royals to win the series. They might even log two more wins leading up to Friday’s series opener with a doubleheader set to go against the woeful Pittsburgh Pirates on Thursday. The home team won’t have to face either Shane Bieber or Mike Clevinger, and they get the benefit of staff ace – Jack Flaherty – throwing on Saturday. With that, you can expect oddsmakers to install the Cardinals decided favorites to come out on top of this series.

McKenzie was nothing short of electric in his MLB debut against Detroit last Saturday. The youngster went on to throw six dominant innings and held the Tigers to just a pair of hits and 1 ER while issuing a lone walk and racking up 10 strikeouts. With Zach Plesac still being punished for putting his teammates at risk to the coronavirus, the outing granted the 23-year old a second start in the opener. He had the Tigers off base all game long with his high heat and outstanding curveball. However, his heater found the heart of the plate way too much. If that happens again in this turn, you can be sure Paul Goldschmidt and company make him pay.

His name is laughable. Unfortunately, his stuff has been as well with the righty failing to reach the fifth inning in a third straight start. The home run ball has been a major issue for De Leon who has conceded one in each of his three made starts. Opponents are only batting .182 against him overall with his curveball proving to be a major weapon, but the few hits he’s allowed per start have been of the extra base variety. Inflated pitch counts have also prevented him from going deep into games evidenced by a laughable 7.5 BB/9 average. I’d want nothing to do with laying chalk in his fourth start, but will very much so be interested in the over.

Carrasco has been a tough nut to crack so far this season. He started it off like a house afire registering three straight quality starts to go along with a couple wins. Since then, he’s been roughed up for 16 hits (3 HR) and 10 ER while tallying a poor 16:9 K/BB ratio. His opponents in those outings were the Cubs, Pirates and Tigers – certainly not a murderer’s row! Though St. Louis rates out below average when it comes to hitting right-handed pitching (No. 18), Carrasco simply just isn’t in good enough form to consider backing him against the Redbirds staff ace.

While he hasn’t logged many innings through three starts, Flaherty looks to have picked up right where he left off last season. If you remember, he closed his 2019 campaign with 10 straight quality starts of which the Cardinals came out on top six times. Through a trio of 2020 starts, the righty stands 2-0 with a 1.98 ERA, 0.73 WHIP and .160 batting average against. He’s allowed just eight hits (1 HR) and 3 ER through 13.2 combined innings and racked up a 12:2 K/BB ratio in the process. Lifetime at Busch Stadium, Flaherty stands 13-10 with a 2.72 ERA, 0.89 WHIP and .243 BAA. Cleveland’s offense ranks No. 24 in the league versus righties, so this is without a doubt going to be a tough spot for Francisco Lindor and company to excel.

Civale has proven to be a workhorse for Terry Francona. Save for Bieber, there isn’t another Indians starter currently throwing better than the right-hander. His 3-3 overall record hardly paints the right picture of his true ability evidenced by a 3.15 ERA and insane 40:4 K/BB ratio. On top of that, he’s logged a quality start in all but one of his six previous starts by averaging 6.7 innings per outing. His ability to keep batters off base via the walk has been the major boon to his success. The Cardinals will prove to be one of his tougher tests of the season with Matt Carpenter and company tough for right-handers to strike out (No. 2).

Waino looked all but done a few seasons back when he succumbed to a season-ending injury. However, the veteran right-hander bounced back nicely a year ago by accumulating a 14-10 record to go along with a 4.19 ERA and .273 BAA. He’s been even better through four 2020 starts in going 2-0 and allowing just 18 hits (2 HR) and 8 ER with a 16:6 K/BB ratio through 25 total innings. He’ll be gunning to end his no decision streak in this one after taking a pair in his two most recent starts against the Royals and Reds. St. Louis has won three of his four made starts, and he’ll be out to better that mark in his first-ever start against the Tribe in the series finale.