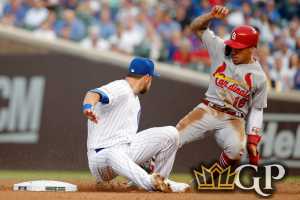 The Chicago Cubs and St. Louis Cardinals don’t like one another. The Cubs and Cardinals will battle in a three-game weekend series with the Sunday game on ESPN. Let's look at baseball odds and baseball picks.

The Chicago Cubs and St. Louis Cardinals don’t like one another. The fan bases despise one another. The fact that the Cardinals have played a role in possibly shutting baseball down this season has fans across the world cursing them right now! All this drama adds up to one heck of a weekend series at Busch Stadium where these hated rivals will engage in MLB betting warfare against one another for the first time in 2020. The Redbirds took 10 of the 19 regular season meetings a year ago. More importantly, they squashed the Cubs playoff hopes by sweeping a four-game series at Wrigley Field before taking two of three back home just to add more insult to injury. The Cubs haven’t forgotten and will without a doubt be looking to get that bad taste out of their mouths. That said, they dropped six of nine to the Cardinals at Busch last season with the under cashing in at a 5-4 clip.

The left-hander has been nothing short of solid at the start of the shortened 2020 season. The veteran enters his third start of the season 1-0 with a miniscule 0.82 ERA and .103 batting average against. He tossed five innings of shutout ball at the Cincinnati Reds in his debut, and followed it up with a quality start against Pittsburgh by going the necessary six innings and allowing just four hits and 1 ER. This will be a stiff test considering the Cardinals beat him like a drum to the tune of a 7.36 ERA and .298 BAA in a pair of starts last season.

Flaherty is the Redbirds’ staff ace, and pitched like one in his season debut at home against Pittsburgh back on July 24. He held the Pirates to just six hits and 2 ER through seven solid innings and tallied 6 K along the way. it was his eighth straight start of quality dating back to last season. He dominated Chicago a year ago in going 2-1 with a 2.48 ERA and 0.83 WHIP, but most impressive was the 19 hits and 10 ER allowed through 36+ innings of work. St. Louis has won six of his last seven home starts with the under cashing in five of those contests.

Mills has been one of many positives to come out of the Cubs’ starting rotation. The righty logged quality starts in each of his first two outings against the Reds and Royals. He was simply superb last time out against Kansas City whom he held to three hits and no ER through seven innings of work. He’s made two career starts against the Cardinals and gave up eight hits (1 HR) and 3 ER while racking up a solid 20:6 K/BB ratio through 13.2 combined innings. He’ll have his work cut out for him in this spot though with St. Louis much better against righties than lefties.

Waino is like a patch of weeds that simply never seems to go away. Now in the 16th season of his illustrious MLB career, the righty has been known to toss a gem or two here and there. That was exactly the case in his 2020 debut when he tossed six innings of 1 ER ball at the Pirates to log his first win of the season. Long known for being a Cub killer, that wasn’t the case last season when Chicago roughed him up to the tune of a 5.27 ERA, 1.61 WHIP and .304 BAA over five starts. The Cards did however win two of his three home starts versus Chicago in 2019.

Through three 2020 starts, the book on “The Professor” has been pretty easy to read. When at home, he’s been dominant evidenced by his 2-0 record, 3.54 ERA, 0.93 WHIP and 12:0 K/BB ratio through 16 total innings. His lone road start was an entirely different story altogether with the Reds tagging him for seven hits (1 HR) and 6 ER. That said, Hendricks tossed seven innings of shutout ball to register the win in his lone Busch Stadium appearance last season. In doing so, it moved him to 4-1 in the venue lifetime with a 2.92 ERA and 1.07 WHIP over 49+ innings.

Hudson suffered the embarrassment of losing to the Pittsburgh Pirates in his 2020 debut. Mike Shildt continuing to look to him lets it be known just how desperate the Redbirds are for starting pitching help at the current time with both Carlos Martinez and Alex Reyes ailing. Hudson served up seven hits (2 HR) and 4 ER through just 4.1 innings against a Buccos offense that currently ranks second to last in the league in batting average and OPS. He’ll now be forced to deal with a Cubs offense that’s raked righties for a .474 slugging percentage and .804 OPS in the early going.