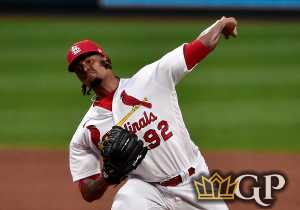 The Brewers play the Cardinals in a five-game series that begins on Thursday. The playoff race in the NL is so tight that it is very likely that the winner of this series will make the playoffs, while the loser will be out. Let's look at MLB picks.

Entering the final week of the abbreviated regular season, the National league playoff picture is a complete mess. With only four of eight seeds all but locked up, the bottom four are all available for whichever team finds its way in. The St. Louis Cardinals are currently in the playoff mix, while the Milwaukee Brewers are on the outside looking in. That can all change over the course of this crucial series that will find the Brew Crew and Redbirds combating one another five times in four days. Whichever wins the series will likely punch a ticket to the expanded playoffs. The loser likely won’t with as many as eight teams still in contention. This is basically a five-game series with a playoff bid on the line; what more could an MLB bettor ask for?!

Burnes has been nothing short of a revelation in his breakout campaign. The righty is yet to be defeated through eight overall starts, and he’ll enter No. 9 having logged quality efforts in four of his last five starts. The only one he didn’t go the required six innings was against these same Cardinals, but he still only conceded 1 ER and struck out 10 through 4.2 innings. He’s 2-0 with a 2.08 ERA and .143 BAA over five made road starts.

Kim has been a nice little find for the Cardinals. The South Korean import came off the IL back on September 14 and threw seven innings of shutout baseball, but got nothing from his offense and was forced to take the no decision. He wasn’t nearly as sharp last time out in Pittsburgh where he conceded six hits (2 HR) and 4 ER through 5.1 innings in his worst outing of the season. That said, he’s yet to allow a single ER at home through two starts.

The rivals are scheduled for a doubleheader on Friday. The pitching matchups are known for the first game, but nothings surfaced in respect to the starting pitchers for the night cap. Jack Flaherty gets the starting nod for the late afternoon tilt. The righty most recently surrendered 9 ER and a pair of homers to the Brewers in what amounted to be his worst start of the season. He did however bounce back nicely last time out by tossing six innings of 1 ER ball at the Pirates and registered a season-high 11 strikeouts.

The Brewers best hope the bullpen is fresh and ready to go for this game considering Lindblom has failed to pitch through six innings in any of his nine made starts. The righty has however been on top of his game in tossing 10.1 combined innings of 1 ER ball at the Royals and Cardinals over his last two turns. It could be tougher the second time around with St. Louis getting to see his stuff now for a second time.

Woodruff’s counting stats are fantastic! He’s allowed just 49 hits (8 HR) and 23 ER while racking up a stellar 72:15 K/BB ratio. Unfortunately, the personal success has only amounted in a 2-4 record mostly due to the staff ace failing to go deep into games with regularity. He hasn’t logged a win since August 25 and has allowed at least 2 ER in all but two of his 12 made starts. He took the loss in each of his last two turns, and was outdueled by Waino in his lone appearance against the Redbirds this season.

Whatever Fountain of Youth Wainwright drank out of this past offseason, I’d appreciate if he pointed me in the direction of it. Seriously, Wainwright has risen from the dead in 2020 in logging a 5-1 record and rock solid 2.87 ERA. He gave up more hits than innings pitched last season, but has only given up 46 through 59 innings of work this season while tallying an impressive 51:14 K/BB ratio. His lone appearance against the Brewers saw him go seven strong and concede just 2 ER while fanning nine and issuing one free pass.

When healthy, Anderson continues to be one of the better left-handed pitchers in the game. Unfortunately for the veteran, that’s been few and far between. But for now, he’s healthy and has been an invaluable piece to the Brewers rotation in going 3-3 with a 4.38 ERA and 24:9 K/BB ratio. He was the beneficiary of an 18-run outburst in his last turn against the Cardinals whom he held to just five hits and 2 ER over six innings to earn the victory. St. Louis has been league average against lefties, so Counsell might be able to get some innings from him in the series finale.