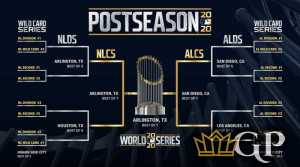 The Sweet 16 is locked in and ready to begin its path towards capturing a World Series title in a playoff structure never before seen in the history of Major League Baseball betting. Let's look at MLB Playoff Odds and MLB Playoff Picks.

The Sweet 16 is locked in and ready to begin its path towards capturing a World Series title in a playoff structure never before seen in the history of Major League Baseball betting. The Los Angeles Dodgers enter the second season as the +120 odds on favorite to represent the NL in the Fall Classic, while the Yankees (+280) hold that distinction in the AL regardless of the fact that it qualified for the playoffs as the No. 5 seed. But with the best-of-three structure set to go down in the Wild-Card round, nobody is safe. All it takes is one poor start from a staff ace or an offense to go ice cold to send a team home. Also keep in mind that each game of every respective series will be held at the home ball park of the higher seed with only cardboard cutouts in attendance. That takes home field advantage completely out of the equation which makes it even more plausible for MLB bettors to witness numerous upsets. It’s simply just a matter of picking the right spots that could lead to a ticket cash on the individual series odds. Let’s jump into the current MLB odds offerings and see where the value lies!

The Dodgers were simply just head and shoulders above the rest over the course of MLB’s abbreviated 60-game schedule. Dave Roberts’ troops were dominant in compiling a 43-17 overall record that produced upwards of $600 in profit regardless of the fact that the team went off the board favored to win every single game. With that, the team’s 76 percent implied probability of winning this series against a Brewers team that qualified for the playoffs with a sub .500 record doesn’t look to be much of a chore; especially with Milwaukee really hurting in the starting pitching department with Corbin Burnes recently going on the shelf due to an oblique injury. LA owns the league’s top ranked offense and pitching staff. Milwaukee’s offense rates out with the worst in the league (No. 27), and it doesn’t possess the speed on the base paths (No. 29) to keep the pressure on the Dodgers’ defense to manufacture runs. Unless Christian Yelich breaks out of his season-long slump in a big way, it would be a big surprise to see this series go any longer than the minimum. For all intents and purposes, advancing Los Angeles is the no-brainer of the Wild-Card round.

“I think were a *ucking nightmare. And I think everybody knows that.” This is what former All-Star first baseman Joey Votto had to say days before the Redlegs clinched the No. 7 seed in the National League. And to be completely honest, he just might be right! No team closed the regular season out hotter than Cincinnati who logged wins in 12 of their final 16 games. Four of the final series played came against teams that went on to qualify for the postseason. As great a team Atlanta currently has, it couldn’t have been matched up against a tougher first round opponent. The ‘Natti will own a huge advantage on the starting bump with it lined up to throw Trevor Bauer, Luis Castillo and Sonny Gray over the course of this do-or-die three game set. The Braves will counter with Max Fried in the opener, but he’s been nothing more than a dominant 5-6 inning pitcher all season. The Braves do possess the better overall pen, but are likely to go to it more often than the Reds which will be another added bonus for the Reds chances of advancing. All bets will be off if Freddie Freeman and company rake, but that will be tough to do as dominant Cincy’s starting staff has been in recent weeks. Don’t stop there! Add some Cincy NL and World Series futures to your portfolio as well if you haven’t already.

It only makes perfect sense to see a team like the Miami Marlins in the playoffs. Simply just chalk it up to being the cluster you know what that 2020 has proven to be. We’re talking about a team that lost 105 games a short season ago to bring up the rear of the NL East standings; it trailed the division winning Braves by 40 games! Be that as it may, Don Mattingly pushed all the right buttons to get his squad into the postseason in a year many thought the Fish would be laying the groundwork for the future. You know darn well Wrigleyville took a collective breath when it saw this pairing on Sunday night. Flashbacks immediately went back to the 2003 NLCS that saw the Marlins take advantage of the Bartman incident and a number of errors (Alex Gonzalez) to come back and win the series in seven games. While much has transpired since, the bad juju from that defeat will be prevalent throughout the series. Adding to the mix is that the Cubs are by no means as good as their 34-26 overall record indicates. While the starting staff will be in great shape with Yu Darvish and Kyle Hendricks at the forefront, the bullpen is an utter joke. On top of that, the offense failed to consistently produce runs; especially in the clutch. Miami has some live arms in its rotation like Pablo Lopez, Sandy Alcantara and Sixto Sanchez that could give Cubs’ hitters major headaches. Chicago certainly deserves to be decided favorites considering its roster is chockfull of veterans that’ve been here before and won a World Series, but the value lies with the Marlins on the series odds with it possessing absolutely no pressure at all to perform.