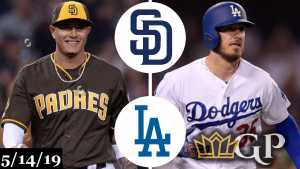 Major League Baseball will be offering non-stop betting action with the MLB Odds all weekend long. And we have a loaded card of top contenders, along with some surprise teams going at it Friday through Sunday night. Let's look at MLB Weekend Best Bets.

Major League Baseball will be offering non-stop betting action with the MLB Odds all weekend long.  And we have a loaded card of top contenders, along with some surprise teams going at it Friday through Sunday night.  Among the best series of the weekend is the San Diego Padres hosting the Los Angeles Dodgers.  LA and San Diego are the top two teams in the National League West.  The Padres want to prove that last year’s success during the pandemic shortened schedule was no fluke.  And the Dodgers want to demonstrate that their first World Series championship in 32 years was legit.  The weekend ends with a Sunday Night ESPN matchup of the Atlanta Braves and Chicago Cubs from Wrigley Field.  In between is plenty of opportunities to pad the wallet.  Let’s take a look!

The Dodgers picked up where they left off last year with nine wins in their first 11 games.  So too, has San Diego bolted out of the gate with eight wins in their first 12 games.  Wally Buehler is the probable Dodgers, while Craig Stammen is scheduled to go for San Diego.  LA shows excellent balance and dominance, ranking 3rd in MLB for both runs scored and staff earned run average.  San Diego has the numbed on ranked earned run average in baseball.  But the Padres rank 19th for run production.  LA will get a rare online betting price break here as the road team at a quality opponent.

The White Sox have been the poster boys of the pajama boy media for the past two offseason periods due to their aggressive roster remake.  But whether that translates into long term success with the MLB betting odds remains to be seen.  The White Sox stumbled out of the gate with six losses in their first 11 games.  Chicago’s problem is an MLB ranking of 26th for quality starts.  Dallas Keuchel is one of the culprits with a 6.43 earned run average and will try to stem that tide as the projected White Sox starter on Saturday.  Boston will counter with Tanner Houck. The Red Sox are one of the biggest surprises in the early going with seven wins in their first ten games.  The Red Sox rank 2nd in MLB for run production.  JD Martinez was ripping the hide off the ball with a .425 average, ten runs, seven doubles, five home runs, 16 runs batted in, and a 1.427 OPS.

Ryan Yarborough is the probable starter for the Rays with a 6.48 earned run average.  He’ll be up against Yankee ace Gerrit Cole, who is 2-0 with a 1.47 earned run average and 0.82 WHIP.  Both teams opened the season 5-6.  New York’s lineup has been slow to get started.  Aaron Judge has managed to stay healthy in the early going for the Yankees. Judge is hitting a pedestrian .257 with four runs, two home runs, five runs batted in, and a .779 OPS.  But is capable of much more in the days ahead.

Last fall, the Braves shut down all of the jokes about their playoff failures with a courageous run that ended just one win short of the World Series.  Atlanta is the prohibitive favorite to win the National League East.  By contrast, the Cubs raised the white flag of surrender before the season even began.  Chicago’s era of glory has ended by its own hand.  The Cubs are a weak-hitting team going up against a powerful Braves lineup due to bust out.  Bryse Wilson is scheduled to make his first pitching appearance of the year as the Braves starter.  Alec Mills is projected to start for the Cubs.  Braves right fielder Ronald Acuna is one of the most entertaining players in the sport. Acuna is hitting .429 with 12 runs, five doubles, four home runs, eight runs batted in, and a 1.371 OPS.