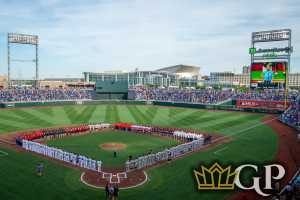 The Washington Nationals finally know who they will face and what city they will travel to for the World Series opener on Tuesday night. They’ll face a Houston Astros team who will be heavily favored to win it all for the second time in the last three...

The Washington Nationals finally know who they will face and what city they will travel to for the World Series opener on Tuesday night. They’ll face a Houston Astros team who will be heavily favored to win it all for the second time in the last three years. Of course, Washington has been the underdog every step of the way here this October, so it’ll be nothing new for Dave Martinez’s crew.

Just like in 2017, Houston took down the New York Yankees in the ALCS. They went on to win the World Series that year and will try to do so again, but there is more pressure this time as they’re expected to win. Washington, on the other hand, has already vastly exceeded expectations with a single postseason series victory. They’re playing with house money at this point.

As for these teams head-to-head, the starting pitching matches up well, likely giving up some good pitchers’ duels. Both offenses also turned things on late in the season and are going into the World Series hot. The biggest difference comes in the bullpen. We’ll see whether that can be a difference maker.

The Astros are back in the Fall Classic, this time as huge favorites against a Nationals’ team looking to make franchise history with their first series win. The pressure is on both teams in different ways, but Washington continues as the underdog, a roll it’s embraced every step of the way this October—and even better.

On May 23, the Nationals were 19-31. There were calls from the local media for manager Dave Martinez to be fired and already talk of this team selling at the trade deadline with guys like Anthony Rendon and Max Scherzer possible being available via trade. Then, the team clicked. Rather than selling, they bought in July, adding to a dismal bullpen that was a big part of the early season struggles.

The bullpen is still an issue, but they’ve managed it through the first two rounds of the postseason much like the Astros did in 2017 and the Red Sox last year, using starters on their throw days to get an inning here and there.

Add in epic starting pitching and a solid-enough offense in October and this team is rolling, but they will start the World Series on Tuesday having not played a game in a week after they clinched in four-games against the Cardinals in the NLCS on Tuesday.

The time off can have an impact on hitters’ timing and pitchers’ stuff as well. The team will do the best they can to keep everyone fresh, but such a long layoff has been detrimental for teams historically. We will see if Washington can buck that trend for yet another upset.

As for Houston, they’ve been one of the favorites to win the World Series since Spring Training. They’re stacked in every facet of the game and breezed to an MLB best win total. To make things worse, they bulked up in July with the biggest deadline acquisition, bringing in Zack Greinke to fortify an already strong rotation headed by the top two AL Cy Young Award candidates.

After an early exit in last year’s playoffs, Houston is on a mission to prove they’re a dynasty team. Bettors and oddsmakers alike believe in them. Is that enough?

With their July acquisition of Zack Greinke from the Diamondbacks, Houston has a three-headed rotation monster in Justin Verlander, Gerrit Cole, and Greinke to match up against the Nationals’ top-three of Max Scherzer, Stephen Strasburg and Patrick Corbin - the latter of which is also a former Arizona hurler.

Those three should be the starters in some form in the first three games of the World Series, each lining up to get a second start if this series goes seven.

Cole ended the regular season with a 20-5 record, 2.50 ERA and 0.895 WHIP in 212.1 innings. He struck out an MLB leading 326 and posted a league best 2.64 FIP. Like Cole, Verlander had a miniscule FIP thanks to a high strikeout total and low walk numbers. Both can give up the occasional home run, but without many on base, it usually doesn’t cause too much damage.

Cole dominated in the ALDS with a stagger 25 strikeouts in two games. He’s allowed just a single run on 10 hits in 22.2 innings this October. Verlander, meanwhile, hasn’t been quite as good, New York jumped on him for a few runs in Game 5 of the ALCS, but he hung in there to pitch a solid game overall despite the runs in the first.

This postseason, Verlander—even with his last start—has a 3.70 ERA though he is just 1-2 in four games. He’s still an elite pitcher and established postseason ace.

Unfortunately for Houston, the same cannot be said about Greinke. The regular season ace was 8-1 with a 3.02 ERA for the Astros in 10 games after his trade from Arizona but is 0-2 with a 6.43 ERA this postseason. His postseason career has been spotty at best, but he’s still an elite pitcher.

The bigger issue in the Houston rotation is the No.4 spot. The Astros skipped the spot in the ALDS and went to a bullpen game in Game 6 of the ALCS. Fortunatley, the team has the bullpen depth, but relying on that many pitchers can be dangerous.

Jose Urquidy and Brad Peacock are starters turned relievers that each can provide some innings in such a game.

Nevertheless, Game 4 is an area Washington may have an advantage. Scherzer and Strasburg figure to battle Verlander and Cole while former teammates in Corbin and Greinke are viable options in Game 3. Corbin, like Greinke, hasn’t had the greatest postseason. He’s been used in the rotation and out of the pen with some good appearances and some sketchy ones, posting a 7.43 postseason ERA in 13.1 innings.

This postseason, however, Strasburg has taken his game to another level. He’s got a 1.64 ERA in 22 innings with 33 strikeouts. In his career, he’s now got a 1.10 postseason ERA in seven games.

Scherzer, meanwhile, like Verlander, is a proven regular season and postseason ace. He came into October with some questions about his health but has answered those questions positively with a 1.80 ERA in 20 innings.

As for Game 4, rather than a bullpen game like Houston, the Nationals can turn to an established big-league pitcher in Anibal Sanchez who has been lights out in two games this October, allowing just one total run on five hits in 12.2 innings pitched.

While the rotation may swing ever so slightly in the Nationals’ advantage given their option in Game 4, the bullpen pushes this right back in Houston’s favor.

In the regular season, the Astros had the third best bullpen ERA in baseball. Washington ranked dead last with an embarrassing 5.66 mark. The postseason bullpen ERAs of the two clubs make things a bit tighter, but Houston’s still gotten better relief production even with Washington using its starters out of the pen with regularity.

Other than the starters on their off-days, the only reliable relievers the Nationals have in their bullpen are Daniel Hudson and Sean Doolittle. The former was acquired midseason from the Blue Jays and was thrust into the closer’s role out of necessity when the latter struggled. Doolittle has gotten himself back on track at the right time, however, giving Washington a solid one-two punch out of the pen. Unfortunately, there’s little else.

Tanner Rainey and Fernando Rodney have gotten some work and faired reasonably well, but both are not high-leverage relievers at this point in their careers. Meanwhile, Hunter Strickland and Wander Suero are the only other two relievers to see any action in October and both bombed in their appearances.

As for Houston, Roberto Osuna is a top-end closer and lockdown option in the ninth inning, but it’s the options at A.J. Hinch’s disposal leading up to him that makes Houston’s pen stand out compared to Washington’s. It’s so much deeper.

Ryan Pressly and Hector Rondon are quality late-inning arms that have struggled, but Houston’s been able to overcome that because of the other options. Will Harris has been lights out. Joe Smith has gotten the outs when called upon. Even Josh James has thrived. For longer outings Jose Urquidy and Brad Peacock give the team the ability to go multiple innings to save a pen.

It’s hard to find a lineup as strong as Houston’s. Top-to-bottom this team can take anyone deep. There are seven 20-homer bats and four with at least 31 bombs and that doesn’t even count Yordan Alvarez who hit 27 in just 87 games.

In addition to the power, this team puts together quality at bats from every position in the order. Everyone has a solid OBP, works the count and finds their pitch to hit.

On the year, Houston scored the second most runs in the sport and had the best offense in the second half with a .887 combined OPS.

In October, the offense has been a bit harder to come by and the team’s OPS has plummeted to .645 as a unit.

Yuli Gurriel, Carlos Correa, George Springer, Josh Reddick, and Yordan Alvarez have all struggled in the playoffs though the team’s been able to get big hits when needed. Despite a .171 average and just seven hits for Correa, two have been big time home runs. He’s got six RBI and Gurriel has eight even with a .541 OPS.

While most Astros have not put up the greatest numbers, Jose Altuve is an exception. He’s 15-for-43 with five walks and five home runs. He’s the only one swinging very well. The rest of the team has just managed to key hits when needed.

Washington has been a better offense in the postseason with a .697 OPS though that pales in comparison to their regular-season numbers as well, particularly in the second half where the Nationals were the top offense in runs and OPS in the NL.

Here in October, they have Anthony Rendon and Juan Soto as the key middle-of-the-order thumpers, but it’s some of the role players like NLCS MVP Howie Kendrick who’ve made the real difference. This is a quality lineup with a nice blend of hitters who should prove to be a challenge for Houston.

Look for some well-pitched games in this series, particularly early on. The starters should put their teams in a position to at least be in the game late, but the bullpens are the separator here. The extra time off for Washington may also come into play, particularly early in the series.

Count on Washington to hold their own and steal a few games at home, but the Astros are a hard team to beat in Houston. Washington should steal Game 4 with the starting pitching advantage and could take another, but this series favors Houston in a big way for a reason.

The starting pitching and offenses are well matched between these two teams. Houston’s offense is better on paper, Washington’s is playing better now. But the real difference is in the bullpen and it's hard to ignore.

World Series Pick: Washington has been a fun story to follow but look for their bullpen to come up short in their quest for the franchise’s first title.
Facebook
Twitter
E-Mail
We provide the most accurate and reliable sports betting information all in one spot. Whether you are looking for a place to bet or just need the news to help you decide your next pick, Gamblers Palace will point you in the right direction with daily sports news, player status and updates as well as sportsbook ratings and recommendations.