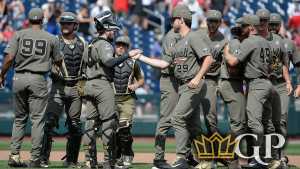 Can anyone stop the Vanderbilt Commodores? After failing the first time around, the Louisville Cardinals will get another go at it on Friday night as the two teams face off again in Omaha.

Can J.J. Bleday and company continue rolling and secure a spot in the finals for this College World Series on Friday or will Louisville live to play another day with an inspired win with their backs against the wall? There’s only one way to find out.

Vanderbilt was the favorite coming into the College World Series for a reason. With UCLA eliminated in the Super Regionals, the Commodores offered the best balance of any team still in the mix and they’ve shown that through their first two games in Omaha.

The Commodores blew through Ohio State and Indiana State in the Nashville Regionals and although Duke got a huge blowout win to kickoff the Super Regionals, Vanderbilt bounced back in a big way, showing resiliency.

Over the team’s last four games, they’ve allowed just six runs while scoring 24. That includes a 3-1 win over Louisville and a 6-3 victory over Mississippi State here in the College World Series.

Offensively, few teams can even come close to what Vanderbilt offers. The team has a .318 average and has power and speed. Outfielder J.J. Bleday is the star, earning a top-5 pick in the latest MLB draft. He’s got a .350/.464/.717 slash line with 26 home runs and 69 RBI in just 254 at bats. He can mash and is a huge looming threat in the order, but he’s not alone.

Austin Martin is batting .410 while getting on base more than half the time. He also has some pop and quite a bit of speed to do damage on the bases. Meanwhile, Stephen Scott, Ethan Paul, and Philip Clarke are all also hitting over .300.

This team can do damage up and down the order and with a team OBP of .418, they’ve—collectively—got a great eye, forcing the opposing pitchers to make their pitch.

Louisville has a strong offense, too. With a team average of .293 and OBP at .388, the Cardinals aren’t quite the Commodores, but as a team, they still have solid contact rates and a good batting eye; the power is missing a bit, however. There’s no Bleday on this roster. Alex Binelas is the only double-digit homer bat.

Still, this team can manufacture runs. There is quite a bit of speed up-and-down the order. From Tyler Fitzgerald to Justin Lavey and Jake Snider, this team can out run Vanderbilt. They’ll need to use that speed to create pressure on the Commodores’ defense. That’s the same pressure that led to the throwing error that allowed the tying run to score in the ninth for the Cardinals over the Bulldogs on Thursday night.

The Cardinals’ offense showed how good it can be in the Super Regionals, scoring 26 runs over the two games against East Carolina. They only allowed one run in those two games.

Louisville, however, opened the College World Series with a loss to this same Vanderbilt team as the offense went MIA, scoring just once. They managed five runs against Auburn and four in their most recent win over Mississippi State, but were held scoreless through the first six frames.

The Commodores could go back to Drake Fellows on Friday after his seven-inning, one-run performance on Sunday against the Cardinals. He’s now 13-1 though he does have the highest ERA of the team’s four starters.

Kumar Rocker followed up a huge showing against Duke with a solid outing against the Bulldogs and won’t be an option for Friday Mason Hickman and Patrick Raby are both options. Both pitched to sub-3 ERAs on the season, though both could also be used in relief.

Meanwhile, Tyler Brown offers a strong closer with 14 saves and 58 strikeouts in just 41.2 innings. He’s sporting a 2.59 ERA. Jake Eder, Ethan Smith and even Hugh Fisher are all big arms that can be called upon if needed, giving the Commodores plenty of insurance behind an already stellar crop of starters.

On the other side of this matchup, Reid Detmers could make it interesting. He’s slated to get the start after starting the first game of the College World Series and holding his own against Vandy despite the loss.

In that game, he went 5.2 innings and only allowed one run on three hits. He did struggle with his command, however, and walked six batters. He was able to minimize the damage in his outing but threw 102 pitches before the sixth and couldn’t give the team length. The bullpen ultimately surrendered the game.

Detmers will need to be in the strike zone more, but we’ve already seen his stuff play well against the Commodores when in the zone.

The southpaw went 12-4 on the year with a 2.79 ERA and 0.97 WHIP in 113 innings as the team ace. He struck out 167 batters with just 33 walks and he held opponents to a .177 average. The K:BB ratio shows his command is typically better than we saw last time against Vanderbilt.

For as good as Detmers is, the bullpen behind him is rather good. Michael Kirian has a 1.69 ERA in 32 innings and Shay Smiddy, Adam Elliott and Michael McAvene all have sub-3 ERAs.

The Commodores won their earlier matchup in Omaha and sit in a good position to move on to the finals with a win over Louisville.

Look for strong starting pitching from Vanderbilt as the Cardinals struggled to mount any consistent offense. The Commodores should grab the early lead with a potential long ball from Bleday or Scott. From there, they’ll keep adding on while the pressure is off the pitching and they continue to throw strikes and record outs.

This is a must-win game for Louisville, but Vanderbilt has a loss to play with. They, obviously, don’t want this to go another game, but that safety net should allow Vandy to play a looser, less error-prone brand of baseball compared to the Cardinals.