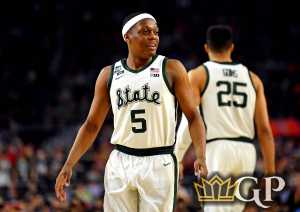 Though sports bettors are in the thick of the NFL and college football seasons and the NBA and NHL are in the early stages, it’s once again that time of year to start keeping an eye on what the kids are doing on college hardwoods across the country.

Though sports bettors are in the thick of the NFL and college football seasons and the NBA and NHL are in the early stages, it’s once again that time of year to start keeping an eye on what the kids are doing on college hardwoods across the country. College hoops bettors have already had a few days to take in some live action and see what the teams have to offer, but don’t make the mistake of falling in love or writing teams off too quickly. They’ll look much different come March than they do now. With that, let’s put the national championship betting lines under the microscope and see if there’s any lottery tickets worthy of investing in at online sportsbooks.

For all intents and purposes, the 2019-20 Florida Gators were enormous disappointments. KeVaughn Allen and Jalen Hudson were two of the primary reasons why. An excellent defensive team was hampered game in and game out by an offense that wouldn’t know what efficiency was if it smacked them right upside the head. This season looks to be much different with the keys to the car turned over to youngsters Andrew Nembhard, Noah Locke and versatile big man Keyontae Johnson. The straw that will now stir the drink will be none other than Virginia Tech grad transfer Kerry Blackshear who represents the first low post threat head coach Mike White will have gotten to coach since arriving in Gainesville. Also keep an eye out for incoming freshman Scottie Lewis who brings the type of athleticism and scoring power the program hasn’t seen in quite some time. With an offense now able to be paired up with what’s expected to be another top-notch defense, the Gators just might prove to be the team to beat in the SEC as well as the NCAA Tournament!

The Buckeyes are now 2-for-2 in qualifying for the Big Dance under Chris Holtmann’s watch. Even in a year Ohio State was expected to take a precipitous drop in the standings due to the loss of a key player like Keita-Bates Diop, Ohio State still went on to win 20 games and advance into the second round of the NCAA Tournament before getting bounced by the Houston Cougars. The losses are much less this time around, and the influx of talent rates out as the No. 12 best recruiting class in the country. Pair that with Kaleb Wesson, Andrew Wesson, Luther Muhammad, Kyle Young, Musa Jallow and Duane Washington all returning, and the 2019-20 Buckeyes look to be a surefire B1G title contender. From size to scoring to rebounding to experience; the Buckeyes look to have it all - especially at the defensive end of the court where the team buckled down and made most of its hay a season ago. Now a year wiser and hungrier, it wouldn’t shock me in the least if Ohio State found a way to oust Tom Izzo’s Michigan State Spartans for conference supremacy and make some real noise come tournament time!

The Golden Eagles saw their season come to an abrupt end in the NCAA Tournament a season ago when they fell victim to Ja Morant and the Murray State Racers in the 12/5 matchup of the Round of 64. The warning signs were there for that to occur at the tail end of the season with Wojo’s kids dropping its final four regular season games before flaming out early in the Big East tourney. I banked on it by fading Markus Howard and company against the Racers. Regardless, Howard is back for his senior campaign. Though he’ll be without the services of the Hauser twins who dropped a bomb in the offseason and decided to transfer, there’s still some solid talent returning that should allow for the Golden Eagles to play a major role in how the conference shakes out. That Sacar Anim kids pretty darn good as well! Wojo has done a fine job building the program from the ground up. He’s got one of the best collegiate scorers in his back pocket, and I firmly believe he’ll find a way to get this team back to the dance where anything can happen.