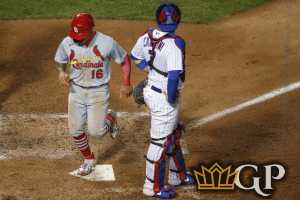 The St. Louis Cardinals and Chicago Cubs already played five games against one another with a doubleheader thrown into the mix earlier this season. Let's look at the upcoming series between the Cardinals and Cubs and baseball betting picks.

The St. Louis Cardinals and Chicago Cubs already played five games against one another with a doubleheader thrown into the mix earlier this season. It will feel like Groundhog Day through Monday with the hated NL Central rivals set to do it all over again. Chicago held the upper hand the first time around in winning three games, and will attempt to do so once again back at home where it’s surprisingly only won 10 of 18 played games (-$167). St. Louis checks in 6-5 on the road where it’s made $359 for those that supported them at online sportsbooks.

The righty has been exceptional to start the season in going unblemished through four starts while pitching to a sub 2.00 ERA. There hasn’t been much wear and tear on his arm either, as he’s only needed to go five innings or less in three starts to help lead the Redbirds to a 3-1 record with him leading the charge. Lifetime against Chicago, he’s 3-2 with a 2.79 ERA and 0.99 WHIP.

Fresh off being named the NL Pitcher of the Month, Darvish will be gunning for a seventh straight win when he opposes the Cardinals for the second time this season. The first time around saw the Cubs’ staff ace throw six innings of 1 ER ball with 7 K and 1 BB. Chicago won the game 6-3 which moved him to 1-2 with a 3.56 ERA and .250 BAA over five career starts against St. Louis.

Adam Wainwright is set to take the bump for the visitors in one of the two games set go down on Saturday. The veteran right-hander has been a workhorse of late going at least seven innings in each of his last three starts. Last time out, he tossed a complete game four-hitter against the Cleveland Indians to help his squad avoid being swept at home; on his 39th birthday no less! He’s made 41 career starts against the Cubs and stands 16-13 with a 4.15 ERA and .315 BAA in those outings.

There’s no news at the time of this writing about who the Cubs will turn to in either game on Saturday. Jose Quintana is out of the mix after recently going back on the IL, so it’s likely Alec Mills, Tyler Chatwood or Adbert Alzolay that will be in the mix of possibilities to get the ball.

Since taking losses in his first two starts, Hudson has been a serviceable arm. Each of his last two starts against the Royals and Reds were of quality after logging 13 innings and surrendering seven hits and 3 ER while racking up a tidy 10:3 K/BB ratio. He’s yet to earn a decision against the Cubs through two starts, but pitched to a solid 2.89 ERA and .167 BAA over four overall appearances.

My have the wheels fallen off unmercifully for the veteran left-hander! Lester was dominant through his first three starts against the Reds, Pirates and Indians in allowing 2 ER over 17 combined innings. Then it all went to hell in a handbasket recently after getting raked by the Brewers and White Sox for 18 hits (6 HR) and 13 ER. He settled down last time out against Detroit, but still gave up eight hits through five innings. He’s 8-6 with a 3.26 ERA and .342 BAA lifetime versus St. Louis who rank No. 25 in the league against south paws.

Kim has enjoyed his anonymity through his first four starts taking advantage of the Cubs, Reds and Pirates who had never seen his stuff before. That won’t be the case this time around after he tossed 3.2 innings of 1 ER ball as an opener against Chicago back on August 17. Ian Happ took him yard in that one. It’s a good bet his ERA doesn’t remain under 1.00 following this start.

“The Professor” put an end to a personal three-game losing streak last time out in Pittsburgh where he logged six innings of 1 ER ball; the lone tally was scored on a home run in which he’s allowed at least one in five straight starts. Hendricks took the loss the first time he faced the Redbirds this season after giving up two runs in the 7th of a shortened game due to the new doubleheader rules. It moved him to 8-3 with a 3.00 ERA and 1.08 WHIP over 19 career starts against St. Louis.