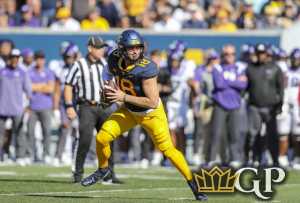 Week 12 College Football picks are ready to roll. We have five games to look at on a busy Saturday of NCAA Football. Let's look at CFB Week 12 Picks.

It’s been a tough season for my college football betting picks. I seem likely to have my second straight losing season after some real success in the late 2010s, but there are still two more weeks in the regular season and bowl season to try and turn things around. With that in mind, let’s get to this week’s selections.

The West Virginia Mountaineers need to win their last two games to get to a bowl game, so they will be focused heading into their home finale with the Kansas State Wildcats on Saturday. They have been very good at home this year with upset wins over Baylor and Oklahoma, and they nearly knocked off unbeaten TCU in Morgantown last month.

Garrett Greene seems likely to get the start in this game after leading West Virginia past Oklahoma last week. Greene completed 12 of 22 passes for 138 yards with a touchdown and ran 14 times for 119 yards and two TDs in the victory. We know what to expect out of Kansas State at this point, and they are at their best against teams that don’t have good passing games. WVU can do enough through the air to keep this close and possibly get the win.

Although Texas fell to TCU last week, the Longhorns are a very good four-loss team. They rank 8th overall in SP+ ahead of teams such as USC, Clemson, and LSU, and they are very dangerous on offense. Quinn Ewers will look to shrug off a bad performance against the Horned Frogs, and the Longhorns might be able to name the score against the Jayhawks.

Any thought of Texas looking past Kansas is put to the side considering the Jayhawks won in Austin last year. Steve Sarkisian has reminded his team of that since it kept the Longhorns out of a bowl game in 2021, so don’t be surprised if the Longhorns win this game by 20+ points.

There are rumors that Bo Nix may be unavailable for this game, and that would give Utah a distinct advantage. Nix has been very good for the Ducks this year after a checkered tenure at Auburn, and Oregon was seen as a fringe CFP contender until last week’s watch against Washington. It’s a significant step down to Ty Thompson, and that will hamper an explosive offense.

Meanwhile, we saw Utah’s offense grind down Oregon’s defense twice last year. They hammered the Ducks 38-7 in Salt Lake City and crushed them 38-10 in the PAC 12 Championship Game two weeks later. Oregon’s front seven has not shown that it can stop a run-heavy team like Utah, so it could be a long night for the Ducks.

Dating back to last year, Stanford has been routinely blown out in November. The Cardinal lost their four games in November of 2021 by 45, 21, 30, and 31 points. They haven’t been better this year either, losing by 38 points at home to Washington State and falling by 35 points on the road to Utah last week. David Shaw’s offense has become extremely predictable, and Stanford just doesn’t have a lot of talent on either side of the ball due to recruiting restrictions.

That should give Cal football a big edge although they are coming off a blowout loss to Oregon State. The Golden Bears haven’t been great either this year, losing six straight games, but they have been competitive in losses to Washington and USC. They have a respectable defense, and we saw them blow out Stanford in this game last season.

Service academies have an excellent ATS record as a double-digit underdog per the CFB betting odds. We saw Navy cover the number against Notre Dame a couple weeks ago, and the Midshipmen are a team to back this week against UCF. The Knights only need to win and are looking ahead to their last meeting with rival USF next week, so this is a prime letdown spot for UCF after a big win over Tulane.