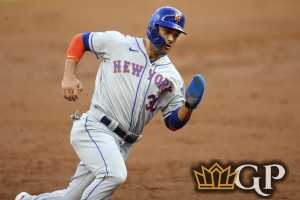 The Atlanta Braves are shoe-ins to qualify for the postseason as current NL East frontrunners that hold a 3.5-game lead over the second place Miami Marlins. The same can’t and won’t be said for the New York Mets . Let's look at Braves vs. Mets picks.

The Atlanta Braves are shoe-ins to qualify for the postseason as current NL East frontrunners that hold a 3.5-game lead over the second place Miami Marlins. The same can’t and won’t be said for the New York Mets who face a steep uphill climb just to get into the expanded postseason. Now 7.5-games in back of the Braves and needing to jump the Brewers, Rockies and Reds just to have a shot at stealing the No. 8 seed away from the Giants, Luis Rojas’s squad must put forth an excellent showing in this series to have any shot. Easier said than done however with the Braves already taking five of the seven meetings to date. Even so, online sportsbooks will have Atlanta installed decided series favorites with two of its young studs getting starting nods through the weekend.

Fried was cruising right along the first month-plus of the season tallying a perfect 6-0 record as the Braves de facto No. 1 pitcher due to Mike Soroka being lost for the season. Unfortunately, the injury bug jumped up and took a bite out of him nowhere costing him a 10-day stint on the IL. This will be his first start since September 5 when he saw his personal three-game win streak snapped in a no-decision against the Nats. He logged a ND versus the Mets way back on July 25 after tossing five innings of 2 ER ball. Look for the Braves bullpen to play a role in this one as Fried has routinely failed to pitch past the 6th inning all season.

The rookie has been a breath of fresh air for a Mets starting staff that’s gotten little from anyone other than Jacob deGrom. He’ll enter his eighth start the owner of a 4-2 record with a slightly elevated 4.17 ERA, but has struggled lately in allowing 12 hits (2 HR) and 10 ER with a 9:11 K/BB ratio over his last 15 innings of work. Having seen the 6th inning only once through seven starts, the Mets bullpen will also play a role in the game’s final outcome.

With Max Fried returning to the rotation and Cole Hamels making his season debut on Wednesday, Tomlin’s days in the starting rotation are numbered if he can’t show any improvement. The right-hander has been ripped to the tune of a 4.68 ERA and .264 BAA with right-handers raking him for a .294 BAA and .809 OPS. The Mets have struggled versus lefties but rank No. 3 against righties, so another tough outing could be in line here after just conceding seven hits and 5 ER to Washington over four innings.

It’s crazy to see how much Wacha has regressed since erupting onto the scene early in his career with the St. Louis Cardinals. New York is so desperate for starting pitching that it continues to trot the right-hander to the bump with regularity even though he’s conceded 35 hits and 20 ER through only 24 innings of work. It’s resulted in a bloated 7.50 ERA, ugly 1.75 WHIP and embarrassing .327 BAA. Atlanta already teed off on him for seven hits (1 HR) and 5 ER earlier this season, so it’s hard to fathom the league’s top-rated offense against right-handed pitching struggling a second time around.

Since getting the call at the end of August, Anderson has electrified with his ability to tally outs via the strikeout. The fact that he’s gone at least six innings in three of four starts makes the youngster all the more impressive. He was nothing short of stellar in his last turn tossing seven innings of 1 ER ball with 9 K at the Nats to secure win No. 3 on the season. While his 4.1 BB/9 average is a concern, you can’t help but fall in love with his 27:10 K/BB ratio. The kids a stud and will be the decided favorite in the series finale.

The veteran right-hander best get his portfolio ready because it’s pretty safe to assume the Mets won’t be welcoming him back next season after inking him to a one-year deal in the offseason. Porcello has been nothing short of hot garbage! While he’s sprinkled in a quality effort here and there, the overall body of work has been horrific. He’s served up 16 hits (1 HR) and 9 ER over his last two starts to the Orioles and Phillies, and the Braves peppered him for 12 hits and 9 ER in his first two starts of the 2020 season. The third time likely won’t be the charm provided Atlanta doesn’t rest its entire roster.