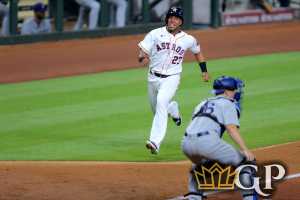 What will the Houston Astros and Los Angeles Dodgers have in store for MLB bettors when the teams close out the four game series that began at the end of July with a two-game set at Minute Maid Park? Let's look at the series, MLB Odds and MLB Picks.

What will the Houston Astros and Los Angeles Dodgers have in store for MLB bettors when the teams close out the four game series that began at the end of July with a two-game set at Minute Maid Park? LA sweeping the first half of the series wasn’t the main story once it was said and done. Instead, it was Joe Kelly headhunting and the benches clearing that led to suspensions ultimately setting up another round of fireworks that could possibly be set off when these teams battle one another through the weekend. Dusty Baker’s troops are in sore need of a good showing in Tinseltown with it likely not going to catch the Oakland A’s in the race for the AL West pennant. The fact that it’s lost a ton of ground in the wild card race only raises the desperation level. The Dodgers would love nothing better than to put one of the final nails in Houston’s respective coffin. With that, this should be a very competitive two-game set with emotions at a fever pitch.

Valdez gets the starting nod for the ‘Stros in the opener. The youngster has been a nice surprise within Houston’s starting rotation that’s been without Justin Verlander a bulk of the season and recently saw Lance McCullers Jr. hit the IL due to a neck issue. The lefty has made eight starts since being installed into the starting rotation with Houston compiling a 4-4 record in those starts. Valdez has deserved better than a .500 overall record with more than half of those outings of the quality variety. On top of that, he’s been an innings eater having gone at least seven innings five of the last six times he took to the bump. In his last turn, he managed to get seven innings under his belt even after conceding 11 hits (1 HR) and 8 ER. Houston’s dropped each of his last two starts, but the Dodgers have struggled against lefties (No. 22) so another quality effort looks to be in the cards.

Gonsolin’s been an integral piece to the Dodgers success to this point of the season even though he’s seen limited work. A stop gap fill-in that takes the mound due to injuries, the righty has been impressive through his five made starts. His sub-1.00 ERA and 0.72 WHIP hardly paint the picture of a pitcher yet to earn a single win. Neither does the .150 BAA he’s held the opposition to through his 23.2 innings of work. LA has come out on the right side of the scoreboard in three of his starts, but that wasn’t the case his last time out when he tossed six innings of 1 ER ball at the Rockies while matching a season-high eight strikeouts. Houston has struggled against right-handed pitching batting 20 points lower than against lefties. With that, this is another plus-spot for the right-hander who would be in line for a win and quality start if he can go at least six innings like he’s done in two of his three prior starts.

Another young phenom feeling his way at the MLB level is Javier. The righty has logged a 4-2 record and 3.38 ERA through eight overall starts of which the Astros came out on six times. Unlike Valdez, he hasn’t been able to go very deep into a majority of his games and that will likely be the case in this spot as well as nasty the Dodgers have been versus right-handed pitching in batting .260 as a team (No. 3) to go along with a .844 OPS. Javier has been extremely mediocre in his last three turns having allowed a home run in each and logging an 11:7 K/BB ratio. Also working against him is the fact that this will be the second time he’ll face the Dodgers this season after dominating the first go round in tossing 5.2 innings of 1 ER ball and registering eight strikeouts. You can be sure Cody Bellinger and company will have dissected the game film of that outing so as to have a better handle of what to expect this time around.

Though Urias enters start No. 9 the owner of an impressive 3-0 record and 3.86 ERA, a look under the hood makes his overall body of work a bit more unimpressive. He’s conceded 37 hits through 37 innings and served up 16 ER for the season. On top of that, the bullpen has been called upon early in just about every one of his starts with him only pitching into the 7th inning one time. He’s currently in the midst of an odd streak that’s seen him give up 1 ER, 4 ER, 1 ER and 4 ER in his last four trips to the bump. It would take a maximum effort to stick to that trend on Sunday night considering how tough the Astros’ offense has been against south paws (No. 13). Los Angeles has lost three of his last four starts, and has only come out on top in one of his three made appearances within Dodger Stadium.